Nottinghamshire collapsed to 135 all out on the final day at Trent Bridge to hand Somerset a 10-wicket win.

Notts moved steadily to 74-2, but then lost their last seven wickets for 61 either side of lunch with Brett Hutton unable to bat due to a hand injury.

Set exactly 100 for victory, the visitors raced to 100-0 in 16.5 overs with Marcus Trescothick unbeaten on 37 and Johann Myburgh 58 not out.

Somerset, who picked up 23 points from the match, have now put themselves in the hunt for their first ever County Championship title, just 22 points behind leaders Middlesex with six games left.

However, it was a victory which looked unlikely at the start of another stifling day in Nottingham, with the hosts on 58-2 and leading by 22.

Their downfall began when Australian medium-pacer Allenby (3-23) trapped Brendan Taylor lbw and then had Riki Wessels caught in the slips for nought in his next over. 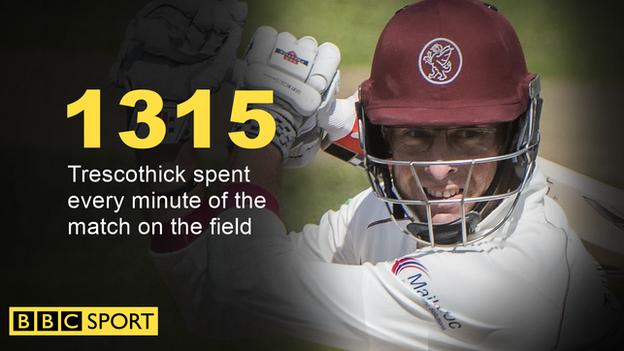 Wickets continued to tumble through a combination of loose strokeplay and accurate bowling, including Notts skipper Chris Read who knocked off the bails with his bat after pulling Gregory (3-27) for six.

Samit Patel tried valiantly to set Somerset some sort of target with a few attacking shots, but was last man out to Gregory for 35.

The Somerset openers inflicted further punishment with a flurry of boundaries in the chase, including three sixes from Myburgh in one Imran Tahir over, to wrap up the win before tea.