England captain Alastair Cook said he was surprised by the row over the decision to omit seamer James Anderson for the first-Test defeat by Pakistan.

Anderson, 33, believed he was fit after a shoulder injury but the England selectors were unwilling to risk him.

"If we'd won, that story wouldn't have blown up like it has," said Cook.

England have trimmed pace bowlers Jake Ball and Steven Finn from their 14-man party ahead of second Test, which starts on Friday at Old Trafford.

Instead of playing for the national side last week Anderson, England's all-time leading Test wicket-taker with 454 dismissals, bowled 22 overs for Lancashire, taking 3-58 in their County Championship defeat by Durham at Southport.

"It happened, it was a slightly messy affair and an unimportant sideshow. We have to move on and play good cricket," added Cook.

Pakistan won by 75 runs at Lord's to take a 1-0 lead in the four-Test series.

Will the selectors be sacked?

England's 12-man squad for the first Test was chosen by selectors James Whitaker, Mick Newell and Angus Fraser, alongside coach Trevor Bayliss, who, along with Cook, wanted to take Anderson's word on his fitness.

However, the selectors decided not to pick Anderson, a decision that was labelled "prehistoric" by England captain Michael Vaughan and "ridiculous" by ex-Australia fast bowler Shaun Tait in an interview with BBC Stumped.

"The medical report was 50-50, so he was left out," said 31-year-old Cook. "The selectors felt he was a week away from match fitness.

"We didn't play the greatest game of cricket, so people start jumping on things that were less important.

"There was a headline that said the selectors will be sacked. I don't know where these stories are coming from."

Anderson returns at his home ground alongside all-rounder Ben Stokes, who has recovered from knee surgery, and Cook confirmed that both will play.

"We've got some really good cricketers in that team, who will be hungry to bounce back," added Cook.

One spinner or two?

Cook did not reveal who would make way if Rashid is selected but said the only way the Yorkshire bowler would be included would be as a second spinner, meaning Moeen Ali's place is assured.

"He is improving all the time. He seems to have been around forever but spinners can take a while to develop."

While England are set to make changes to their bowling attack, opener Cook said it is the batting that cost his side at Lord's and must improve if they are to level the series.

"You know you can talk all you want, but it's about us playing as a group and standing up."

Pakistan leg-spinner Yasir Shah, named man of the match at Lord's after taking 10 wickets, suffered a blow to the shoulder during practice but has been declared fit by captain Misbah-ul-Haq.

Misbah said Pakistan, who celebrated their first win at Lord's since 1996 with press-ups after taking the final wicket, must refocus on securing a first series victory in England in 20 years.

"We know that England are a fine team," said Misbah. "There is a bigger challenge for us in the coming games.

"We always respect the opposition and we know their strengths. We have to really work hard in the next three Tests and we are ready for that." 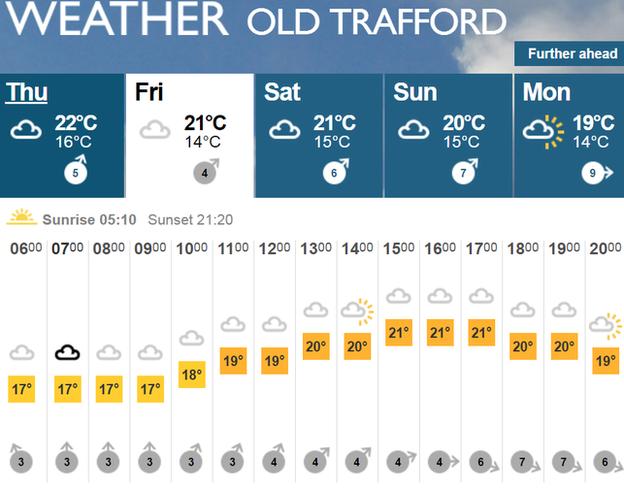