England put in a dominant display to win the fifth and final one-day international against West Indies by five wickets and take the series 3-2.

Alex Hartley took 4-24 and Katherine Brunt 3-35 as the hosts were bowled out for 155, despite captain Stafanie Taylor's 57.

England looked tense at 56-2 in the chase, but Nat Sciver's unbeaten 58 saw them home with 67 balls to spare.

The victory means England are one win away from World Cup qualification.

That could - and should - be achieved on the tour of Sri Lanka in November, when England will play three matches in the ICC Women's Championship.

Not only have Heather Knight's side moved a step closer to booking a place in the home tournament in 2017, they have secured an impressive series victory in her first overseas tour in charge.

Without wicketkeeper Sarah Taylor, who remains on a break from the game to deal with an anxiety problem, and injured pace bowler Anya Shrubsole, they have beaten the World Twenty20 champions in hot, humid conditions and on slow, spin-friendly surfaces. 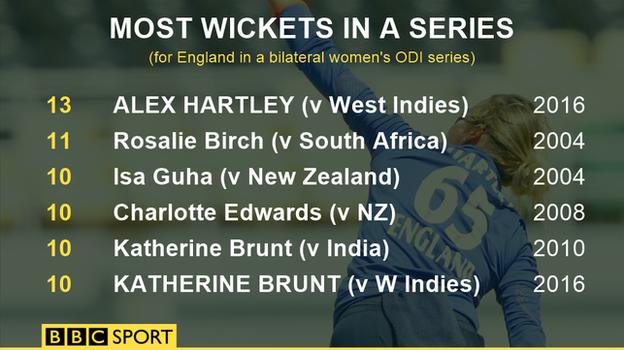 It is those conditions that have made run-scoring so difficult and the toss so important - in all four previous matches the side batting first had gone on to win.

England again had to field first, albeit the later sunshine made batting easier in the afternoon, and their bowlers ensured the run-chase would be manageable.

After Brunt and Georgia Elwiss removed Shaquana Quintyne and Hayley Matthews respectively, Hartley and fellow spinner Laura Marsh got to work on the middle order.

Taylor once again held the innings together with her third half-century in the five matches, but when she was stumped it gave Hartley a 13th wicket of the series, an England record in ODIs.

With Brunt and off-spinner Knight running through the lower order, West Indies lost their last five wickets for 24 runs.

No wobbles in the run chase

England were in a strong position chasing 224 in the fourth ODI, only to give away five run-outs in a 42-run defeat.

Here, they were restricted by West Indies' spinners early on, Lauren Winfield chipping Matthews to mid-wicket for 12 and Tammy Beaumont caught and bowled by Afy Fletcher for 34.

With tension rising, the hosts threatened to find a way back into the match, especially with Knight dropped by Anisa Mohammed at short fine leg on only three.

But the skipper combined with Sciver to reverse the pressure, scoring freely down the ground and, at one point, adding 26 runs in three overs.

Though Knight was caught behind off impressive leg-spinner Fletcher, Sciver found an ally in the busy Danielle Wyatt on the way to her sixth ODI half-century.

Wyatt was brilliantly caught at long-on by Britney Cooper, and Elwiss was bowled by Dottin, but there was to be no England wobble, with Amy Jones hitting the runs that sealed the series.

'We have shown everybody what we're made of'

England head coach Mark Robinson told BBC Sport: "It's absolutely outstanding. We've had it tough. It's been ever so humid, red hot, and the wickets have been massively challenging.

"We've come to their back yard, they were on a high after winning the World T20 and we've shown a lot of character. I'm really proud of them.

"Hartley is a tough cookie. She doesn't shy from hard work and she's bowled outstandingly. She's got a big future if she keeps working hard.

"We're a young team and we're learning as we go. We feel we're going in the right direction and we feel we have shown everybody what we're made of."

"England have shown a huge amount of character. Everyone in this series has played their part.

"There have been little turning points in individuals' careers, like Lauren Winfield playing consistently.

"A sign of a good team is showing consistency in all different kinds of situations and I'm sure they will want to carry that on when they go to Sri Lanka."