Pace bowler Mills only plays Twenty20 cricket because of back pains.

Pietersen has not played an international match since he was sacked by England in 2014.

He has since become a T20 specialist and played in competitions in Australia, India, South Africa, the West Indies and in the Pakistani T20 tournament held in the UAE.

"I embraced [T20] eight years ago and it's what caused me my P45," said the 36-year-old on social media. "I absolutely love how all these youngsters are now benefiting.

"I love how T20 is growing the game. I'm just saying that Tests are falling way behind at the moment. The ICC [International Cricket Council] needs to act and quick."

'I'm struggling to put it into words' 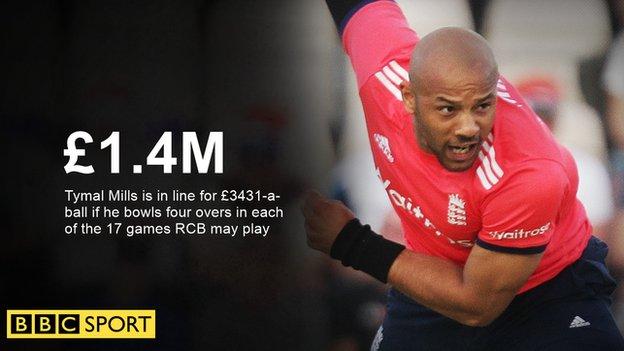 England players Chris Woakes, Eoin Morgan, Jason Roy and Chris Jordan were also bought in the auction, while Jos Buttler and Sam Billings were retained by their franchises.

The fee paid for 25-year-old all-rounder Stokes made him the the most expensive overseas player in IPL history.

"It's a life-changing amount of money," said Stokes. "I'm struggling to put it into words.

"I hadn't thought about how much I would go for. I guess having more than one team wanting me was probably the best position to be in.

"I just wanted to get picked up and play. I haven't been able to play in the past so that was the main thing, anything else was just a bonus.

"I'm looking forward to getting out there and getting involved."