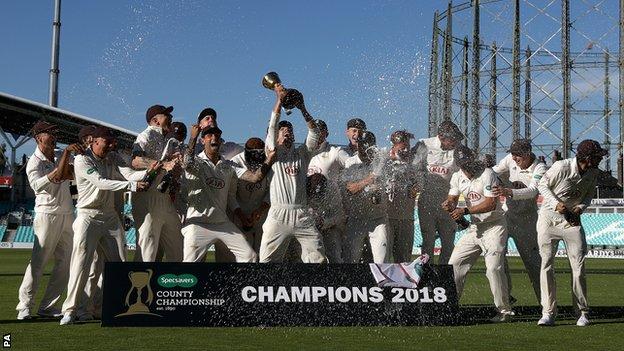 Here are details of all the county signings and departures from the 2019 season.

Counties can field one overseas player in County Championship and One-Day Cup matches, and two in Twenty20 Blast games.

Kolpak contracts are signed by foreign players, using a European Court ruling to avoid counting against the quota of one overseas player per club.

Players who moved counties or retired during the 2018 season are included on the 2018 list. Have we missed anyone? Please let us know.

Other news: Former director of cricket David Houghton returned as head of cricket, while MCC head coach Steve Kirby joined as assistant and bowling coach. T20 bowling coach Dominic Cork took the head coach role in that format, replacing John Wright, who took on a new advisory role including recruitment and strategy. Billy Godleman was named as captain in all formats.

Other news: Head coach Robert Croft left the club on 17 October 2018. Ex-captain Mark Wallace returned as director of cricket in December 2018, with Hugh Morris focusing on his role as chief executive after carrying out the dual role since 2013. Batting consultant Matthew Maynard stepped up as interim head coach for the season, while former Essex wicketkeeper James Foster joined as a consultant for the Twenty20 campaign. Wicketkeeper Chris Cooke took over as Championship and One-Day Cup captain from Michael Hogan and Colin Ingram respectively.

Other news: Skipper Liam Livingstone stepped down in November 2018 and was replaced by Dane Vilas. As part of a coaching restructure, assistant coach Mark Chilton took on the additional role of performance director, with U14s coach Karl Krikken becoming performance manager. Burns ended his overseas stint early for personal reasons.

Possible signings: One-Day Cup captain Paul Horton retired from white-ball formats on 3 May with Twenty20 skipper Colin Ackermann taking over the captaincy for the final two games of the campaign. Horton will continue to lead the Championship side.

Other news: Alex Wakely stepped down as captain on 6 June, and was replaced by Adam Rossington (County Championship) and Josh Cobb (T20 Blast).

Other news: Seamer Harry Gurney retired from first-class cricket in March but will continue to play in the limited-overs formats.

Other news: All-rounder Peter Trego and spinner Max Waller are on limited-overs-only contracts for 2019.

Other news: Middlesex assistant coach Richard Johnson has has joined Surrey in the same role.

Other news: All-rounder Luke Wright has retired from first-class cricket but will continue to play in the limited-overs formats. Batting coach Mike Yardy left at the end of July to take up the same role with New South Wales.

Other news: Jeetan Patel will lead the club in all three formats after T20 captain Grant Elliott retired. Batting coach Tony Frost has given up his second XI responsibilities, with Ian Westwood stepping up from development coach to take charge of the side.

Other news: Yorkshire have appointed Paul Grayson, head coach of the Yorkshire Diamonds women's team, as their new batting coach.