The Board of Control for Cricket in India has called on the International Cricket Council to "sever ties with countries from which terrorism emanates" amid the fallout from the suicide attack in Indian-administered Kashmir.

At least 40 Indian paramilitary police were killed in the attack, for which a Pakistan-based militant group has taken responsibility.

India and Pakistan are scheduled to meet on 16 June in an ICC Cricket World Cup group match in Manchester.

"In view of the... terrorist attack, the BCCI fears for the safety and security of players and match officials participating in upcoming ICC events, including the World Cup," a statement read.

"Most countries from which the members of the ICC hail have strongly condemned this terrorist attack and expressed solidarity with India.

"The BCCI urges the cricketing community to sever ties with countries from which terrorism emanates."

The attack has sparked anger and anti-Pakistan protests across India, although Pakistan has denied any involvement.

There have been calls from some Indians to boycott June's match, but Friday's statement appears to support speculation India would instead try to force the ICC to ban Pakistan from the competition.

The statement added: "The BCCI also wishes to express its concerns over the safety and security of fans of Indian cricket at the World Cup.

"The BCCI trusts the ICC and ECB will ensure the most robust security is provided to players, match officials and fans of Indian cricket for the upcoming World Cup."

India legend Sachin Tendulkar wrote on Twitter that while it would be painful to lose potential points by not playing Pakistan this summer, he would support the decision of the BCCI. 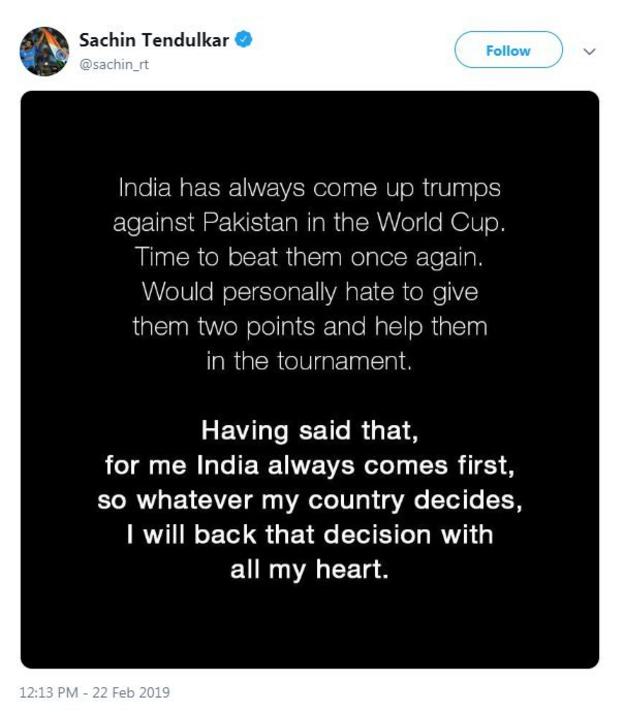 We now have the very likely possibility that the India v Pakistan match at the forthcoming World Cup won't take place.

The Indian cricket board has made it clear it will ask the ICC to remove Pakistan from the World Cup. That is very unlikely. If it doesn't happen, the BCCI says it will refuse to play. That would result in India forfeiting the game, and would end their run of six consecutive wins against Pakistan in World Cups.

This is the biggest match in world sport. I was at the last World Cup match between the two in Adelaide in 2015 - 53,000 people were in the stadium, and a further 1.2 billion watching on TV. If these two don't play each other at the World Cup, it will be damaging to the tournament, as well as the sport as a whole.

In the week since the Pulwama terror attack, India spinner Yuzvendra Chahal has publicly said he doesn't want to play against Pakistan. And sources tell me his views are echoed by several other India players - which would make the match between the two bitter rivals very unlikely as things stand.

General elections are due to take place in India in May - and a new government could change the landscape completely.