After a rule change and months - years, even - of speculation, Jofra Archer has been named in the England squad for the first time.

The Barbados-born Sussex all-rounder, 24, has never played at international level but could now make his debut during England's biggest summer of cricket in a generation.

Archer, who qualified to play for England in March, has been named in one-day squads for games against Pakistan and Ireland in May.

England's Chris Woakes said on Tuesday it would "not be fair morally" to pick Archer for the World Cup, hosted by England and Wales, which begins on 30 May.

And while Archer missed out the preliminary 15-man World Cup squad, he could still be picked if he impresses in the pre-tournament matches.

His searing pace and big-hitting has seen him tipped for the top, with one former team-mate and West Indies international saying he can be "as good as Ben Stokes or Andrew Flintoff" and another describing him as a "walking highlights reel".

BBC Sport has spoken to some of those who know Archer best to find out how a teenager from the Caribbean became one of the world's star all-rounders.

'He had pace, even as a youngster'

Archer was born in Bridgetown, Barbados, to an English father and Bajan mother.

Bruce Cosens, a teacher and cricket coach at the school, said it was "certainly" clear Archer had the ability to play international cricket, even aged 11 when he first met him.

"He opened the batting for the school and would open the bowling, or come on first or second change because there were a lot of fast bowlers around at that time, talented ones," Cosens said.

"He had some good pace, even as a youngster, but at one point we had a lot of pacers so he started to bowl leg-spin - and very well too.

"He went back and was bigger and stronger and bowled extremely well."

A rapid bouncer... and the rest is history

Archer played for West Indies Under-19s three times but, after being overlooked for their 2015 World Cup squad, he left the Caribbean to pursue a career in England.

Befitting a man with undoubted X-factor, the story behind his move to Sussex in 2016 is an interesting one, and based on the recommendation of England and Sussex bowler Chris Jordan, who was also born in Barbados.

"I first came across Jofra when I went back to play for Barbados as an overseas player in first-class cricket and he came to practise with us," Jordan said.

"I padded up to bat and [West Indies international] Shai Hope was keeping wicket.

"Jofra was at the top of his mark and Shai ran up to the stumps and said 'this kid is quicker than you think'.

"I looked at him and I didn't really think anything of it.

"It was a bouncer - it whistled past my head - if it was on target, I was definitely cleaned up. I fell on the floor. Shai ran up to the stumps and had a giggle and said 'I told you so'.

"I went back to Sussex and spoke to Mark Robinson, who was our coach at the time, and told him a little bit about Jofra. Robbo then decided to make the call and get him over. The rest is history."

Archer has now played 28 first-class matches for Sussex, taking 131 wickets at an impressive average of 23.44 with five five-wicket hauls.

What makes his bowling stand out is his consistent pace - he generates speeds in excess of 90mph through his fluid, athletic action.

Yet that is a relatively new occurrence.

"He never touched 90mph until a season and a half ago.

"He used to get a little bit anxious about it, but the first day he did it he came and showed everyone and he has not stopped since.

"I'm not sure if his body evolved or the gym work is paying off.

"He has gone from strength to strength and has bowled more 90mph balls than all of us combined now."

When he originally arrived in the UK, Archer could not play for England until 2022 as he had to complete a seven-year residency period.

However, he is now eligible after the England and Wales Cricket Board (ECB) relaxed those rules last year.

'He was a walking highlights reel'

It has been over the past two years in Twenty20 cricket that Archer has truly made his name.

He was signed by Hobart Hurricanes as a late replacement for the 2017-18 Big Bash season and his mix of yorkers, bouncers, big hitting and athletic fielding saw him become one of the biggest stars of the competition.

"Everything he did - bat, bowl or field - he was a walking highlight reel. Every game he was doing something special."

Archer quickly became a fans' favourite in Tasmania and the franchise signed him up for a further two Big Bash seasons midway through his debut campaign.

"Hobart is a very small place and on evenings or days off we would go to local restaurants or for a drink in a bar and very quickly he started being recognised," Mills said.

"He was getting a lot of attention. I am pretty sure he is a bit of a hero in Hobart these days."

"He is the most naturally gifted bowler I've seen and I don't think he realises how good he is," Stokes said.

"Some of the things he can do at the click of a finger are just 'wow'. It's pretty special to watch."

'He can be as good as Stokes and Flintoff' 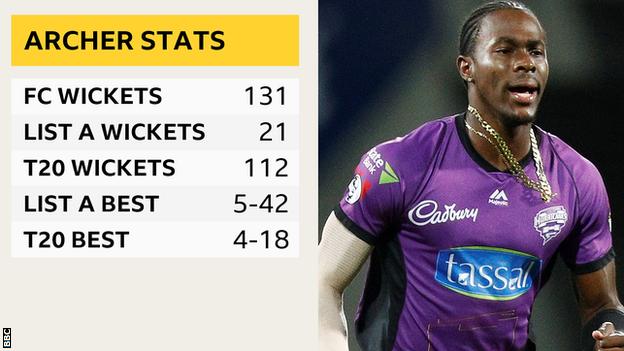 Despite having played only 14 50-over matches for Sussex, Archer will likely make his debut in the pre-tournament one-day internationals against Ireland and Pakistan in May.

But is he worthy of a place in a team ranked number one in the world?

Former England captain Michael Vaughan is on record as saying he has no doubt about Archer's ability, while former West Indies fast bowler Tino Best, who played with Archer in club cricket in Barbados, said he can be "as good as" Stokes and former all-rounder Andrew Flintoff.

"He is a terrific talent," Best said. "If you see him play for Sussex he is a holistic cricketer."

Paul Farbrace, who stood down from his role as England assistant head coach to become sporting director at Warwickshire last month, offered a more cautious view on Archer's World Cup selection, saying it is "not necessarily fair" on the player to pick him.

Speaking in March, Farbrace said: "The only reason I wouldn't pick him is because he hasn't played international cricket.

"It is a big call to select someone to go into a World Cup with the pressure on him and everyone expecting great things. I don't think Jofra needs that pressure."

But Jordan, who describes Archer as his "little brother", does not see the step up to international cricket being a problem.

"The most impressive thing about him is that any time he's been presented with a new challenge he's stepped up to it and risen above it," Jordan said.

"I don't see international cricket being any different. He enjoys a challenge, enjoys having fun, and also he also enjoys his team-mates' success as well.

"He's just always looking to have a laugh, play pranks. He's a free-spirited person and cricketer."

Jordan added: "No-one has seen him take off with the bat yet. He can play every shot - the scoop, a late dab, banging it out of the park, sweeping.

"People have only seen him with the ball at a high level. There is plenty more to come with the bat."