England won their first men's World Cup in July by beating New Zealand in one of the most sensational games of cricket ever played.

In a finale packed with barely believable moments, both teams scored 241 off 50 overs and the super over was also tied - but England won by virtue of hitting more boundaries.

These interviews are from 'The Final Hour', a programme looking back on the last 60 minutes of the Cricket World Cup final.

Buttler has just been caught for 59, swinging the game New Zealand's way.

Buttler: "I want to be the guy getting my team over the line. I got too excited and tried to win it too early.

"I'm usually pretty calm but I was pacing around the dressing room after getting out and punched the massage bed."

Wood: "It was surreal when Buttler punched the physio bench. He never acts like that. He's cool, calm, like Morgan.

"But he couldn't watch, couldn't sit still. I've never seen him like that."

Boult steps on the rope 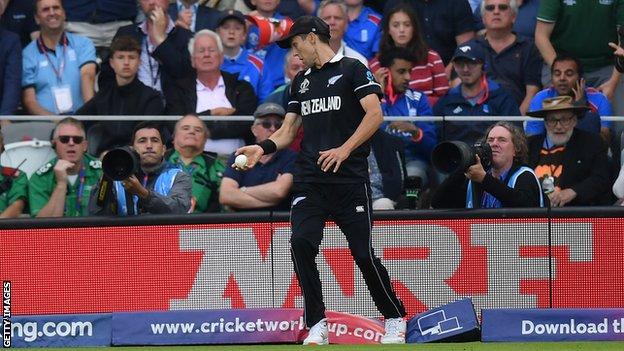 After Woakes and Liam Plunkett fall, England need 22 off nine balls. Their hopes rest on Stokes.

The all-rounder launches the ball to long-on, where Trent Boult catches it but steps back on to the boundary sponge to concede a six.

Buttler: "That's the biggest moment of the game."

Stokes: "As soon as I hit it I knew I hadn't hit it far enough to clear the boundary - it was like slow motion, the World Cup slipping away.

"I was watching the ball and watching Trent settling under it - there was no way he was going to drop it because he's a very good fielder.

"But then I saw him throw the ball up and knew he had stepped on the rope. Martin Guptill signalled six and for some reason I did as well.

"I've got absolutely no idea why, but I felt like I was a fan. I felt like the guy in the stands behind Boult signalling six."

Buttler: "At Lord's you can't see much from the dressing room. I just saw Ben hit it and look disappointed. I thought, 'that's the game done'.

"I didn't see the ball but heard a big cheer as Boult stepped on the rope. The crowd went mental and I realised that not only was it not a wicket but Ben is still in and that's six. Suddenly the belief grows."

Jofra Archer is bowled by the last ball of the 49th over, leaving England needing 15 from six balls as Rashid joins Stokes in the middle.

Rashid: "When I looked in Stokes' eyes I saw hope. I saw confidence. I saw desire and will to win. There was no fear. There were no regrets."

After two dot balls and a six, Stokes whips the ball to Guptill, whose throw from the boundary deflects off Stokes' bat as he dives to make his ground for the second run, going away to the boundary and giving England six runs.

Stokes: "I had to dive to give myself a chance. What happened after that was an absolute freak incident. You will never, ever see that happen again.

"I almost felt bad it happened."

Wood: "The dressing room erupted. It didn't feel like we were sorry."

Roy: "It was magnificent. It was absolutely unreal. We were jumping on the tables, smashing the ceiling.

"That's the moment we all started believing this is our time now."

Buttler: "I saw that one clearly. I got really excited thinking, 'How many is that we need now? We need three off two? We're going to win!'"

The match ends in a tie 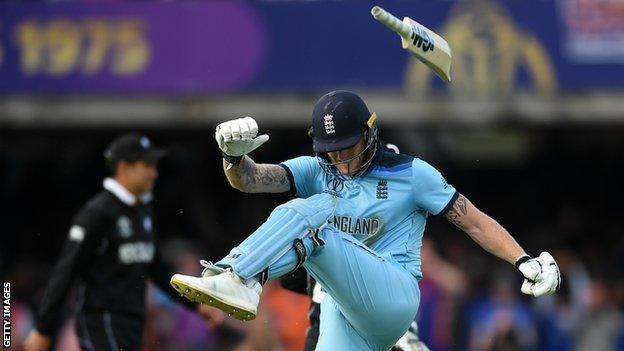 Rashid is run out trying for two and Wood comes in at the non-striker's end for the final ball, with England needing two to win.

Wood: "It's the only time in international cricket I've felt close to throwing up. My mind was so clouded, I wore a chest guard and thigh guard - I would have run faster without them!"

Roy: "Woody shouldn't have strolled out there in all his clobber!"

Wood: "I told Stokesy, 'I'm just going to run.' He completely ignored me. His eyes were big and glazed over."

Wood is also run out attempting a second and the match is tied, leading to a super over.

Wood: "He had the presence of mind to try to hit the gap for two and we would have got it but he hit it almost too perfectly to mid-on and I couldn't get back.

"My mates texted me to say the Titanic turned quicker."

Preparing for the super over

England will bat first in the super over to set New Zealand a target. If the scores are tied again, the team that have hit the most boundaries across the match wins and England are ahead on that count.

Morgan sends Stokes and Buttler out to bat and decides Archer will bowl.

Buttler: "I was quite single-minded and just put my pads on. We didn't really discuss it but I knew I'd be one of the guys to bat.

Morgan: "I spoke to Ben to make sure he had the physical and mental strength to go back out and win us the game.

"He is the biggest team man, the biggest carer, a huge thinker and upholds unbelievable standards on the cricket field - and that rubs off on everybody."

Buttler: "Ben has got unbelievable energy and a massive heart so I knew if it was an option he'd be going straight back out.

"He had a glazed look but I knew he'd be fine."

Stokes: "I was still emotionally caught up in what had happened. I was disappointed I didn't get the two runs to win.

"I couldn't be in that mindset for the super over so I went out the back of the changing rooms into the shower area to be by myself for five minutes and gather my thoughts.

"That allowed me to forget everything and focus on the next 10 minutes, which was the biggest stage in my career."

Rashid: "There was a real buzz in the dressing room but at the same time we were calm and confident. We have Morgs to thank for that."

Wood: "People think we'd have known the rules but when I went out to bat Stokesy was checking we wouldn't lose on wickets lost.

"The umpires came into the dressing room before the super over and told us about the boundaries rule if it was tied."

Roy: "We were ecstatic because we shouldn't have been in that situation. Stokesy had pulled us out of the trenches and got us a super over, which gave us a good chance of winning, especially with Jofra. 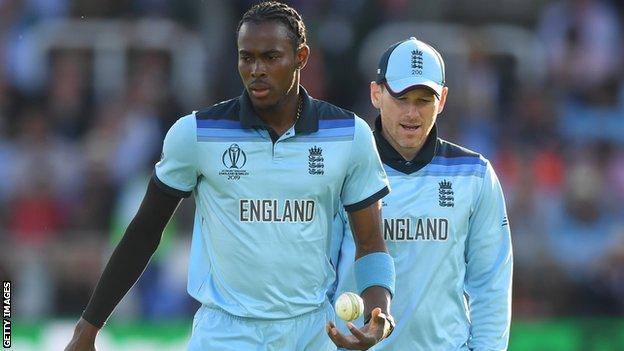 England score 15 from their super over, setting New Zealand 16 to win.

Stokes: "Jof had asked me before about that World Twenty20 final where I bowled the last over and we lost - 'How do you come back from that?'

"I never had a good answer for him and I was going over in my head whether I should say something to him before the super over.

"But I felt if it went wrong I would have blamed myself for not saying something because I've been in that situation. I know what it feels like and it's scary.

"I said, 'Whatever happens here, it isn't going to define your career.'"

Morgan: "I made a conscious effort to speak to Jofra after every delivery.

"He wanted to refer the wide because he thought you could overturn it and I had to tell him, 'No, you can't do that.'"

Buttler: "I felt really in the zone. I've watched it back on TV and, when Neesham hits that six, thought, 'That's it, England are done'. But I didn't feel that on the field."

Roy fumbles the ball as New Zealand attempt a tight second run before throwing to the wrong end next delivery, leaving the Black Caps needing three from two balls.

Roy: "I turned around and saw the crowd staring at me in disbelief that I'd misfielded it. I just wanted to crawl in a hole.

"There were no excuses - it came straight towards me. I tried to throw it in too quickly instead of concentrating on the basics. And then the following ball I threw it to the wrong end!"

Neesham takes a single off the fifth ball. New Zealand need two off the last to win. A single and England win on boundaries scored.

Guptill clips it to deep mid-wicket. Roy fields and throws to Buttler, who breaks the stumps to run out a diving Guptill and secure the World Cup.

Roy: "Everything went silent as the ball hit the bat. Dead silent. It's the eeriest feeing I've ever had and the ball is coming towards me.

"Luckily, I picked this one up and took more time with it. Jos did the rest. As soon as I threw the ball, I knew he was going to be able to take the bails off in time.

"As I threw it I went sprinting off. We just ran and screamed and shouted and hugged. It was incredible."

Stokes: "Jason is running in and I think, 'Don't fumble it.' He picks it up - 'Please be a good throw' - but I can't tell if it's out because I'm at the wrong angle.

"I had to go off Jos' reaction and knew when he ran off, gloves everywhere."

Buttler: "I remember thinking, 'Do your job.' If that was any other piece of fielding in any other game there would be no pressure.

"I remember breaking the stumps and then just pure elation. You do stuff you don't even realise - throwing my gloves up in the air, running around.

"I remember coming round the corner and Jofra is lying on the floor. I gave him a massive hug and that 20, 30 seconds of elation is the best moment of my career."

Stokes: "The more I stopped trying to cry, the more I cried.

"It's the first time the emotions of victory have got too much for me. It was cool."

Morgan: "The moment Jos takes the bails off there is a complete release of emotion - all the highs and lows of the last four years have been justified.

"We ran around like school kids, chasing each other, so excited. An incredible feeling."

Rashid: "We all ran to each other - as a family we felt really connected."

Wood: "I had a side strain so didn't field in the super over. When Jos collects the throw I'm halfway over the barrier, shouting, 'Take the stumps!'

"I remember sprinting, high-fiving Jos as he ran past me, reaching Stokesy on the other side, grabbing each other.

"Woakes was crying. He picked me up and carried me, shouting, 'Woody, Woody, we've done it! We've done it!'"

Stokes: "I don't know when I'll be able to properly reflect on it. I'm not sure we've really 100% taken it all in. Maybe one day I'll have a good answer.

"It was such an emotional seven weeks. We played in our home country, had the support of everyone and the final was ridiculous, remarkable, the greatest game of cricket ever played."