By the end of the first Test's opening day, Sri Lanka's coach puffed out his cheeks and pulled down his cap to hide his face.

"The batting display from Sri Lanka is right up there with the worst we've seen," he said, speaking on Test Match Special.

Some expected England to find things tough during the two-Test series in Sri Lanka.

Instead, a remarkable first day ended with a beaming Stuart Broad describing it as "an absolute dream-world day" for the tourists.

Sri Lanka were bowled out for 135 before tea on day one - the lowest first-innings total recorded at the famous Galle International Stadium. By the close, England were 127-2, just eight runs behind.

Pundits, viewers and listeners alike were stunned as Sri Lankan wickets fell through some of the most inept batting ever seen.

Seven of the 10 wickets fell to attacking shots - two of them reverse sweeps.

Another batsman was caught after the ball had rebounded into the air off Jonny Bairstow's ankle at short leg and there was also a run-out at the non-striker's end backing up.

"The batting from Sri Lanka today has been absolutely diabolical," Vaughan said.

"You go through the dismissals and England won't be able to believe their luck."

"It was a joke by the end," Hussain added.

The guilty batsmen - how the most embarrassing wickets fell 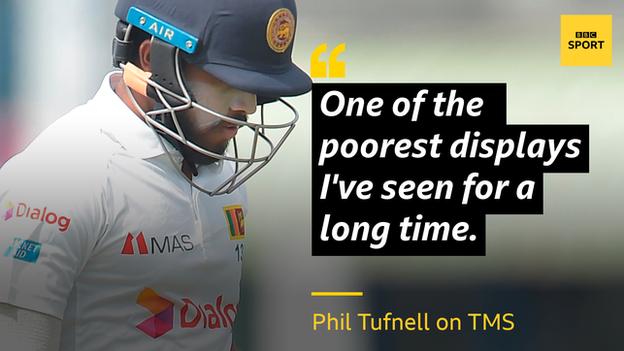 'I didn't bowl that well' - Bess after five-wicket haul

The Test in Galle is England's first since the home series against Pakistan last August. They only had one day of match practice in Sri Lanka - the result of a scheduled revised because of coronavirus and bad weather.

Their lack of preparation, allied to hot and humid weather and spin-friendly conditions, was expected to hamper England's chances but they capitalised on Sri Lanka's shambolic performance.

Off-spinner Bess, in particular, benefited. He claimed 5-30 for what was his second five-wicket haul in a Test match.

"I didn't feel like I bowled very well," the 23-year-old said. "I felt I was quite nervous. I hadn't bowled in a game since the Test matches last summer.

"I didn't feel I bowled as well as I know I can. That is cricket isn't it? There might be days I bowl exceptionally well and go 1-100."

Five Sri Lanka batsmen made single-figure scores and Mathews and Chandimal were the only players to amass more than 20.

Although England lost openers Dom Sibley and Zak Crawley, Joe Root hit an unbeaten 66 and Bairstow 47 not out in reply.

Sri Lanka batting coach Grant Flower said he was "at a loss" as to why his side batted so badly.

"They know these conditions well and it should have been a big advantage.

"England's batsmen showed us there's nothing wrong with the pitch; we batted terribly."

Sam Limbert: Shame in a way that Sri Lanka have been bundled out like that, but waking up during lockdown to some hilarious cricket has been a welcome joy.

Joe Gibney: If Bob Willis were alive today, he'd be dissecting Sri Lanka's batting performance for the next two hours.

Lucy Ford: Five of the Bess (or worst if you are looking at the Sri Lanka batting) for Dom Bess.

James Baker: Dom Bess... but is that the worst five-for of all-time? Shocking cricket from Sri Lanka.