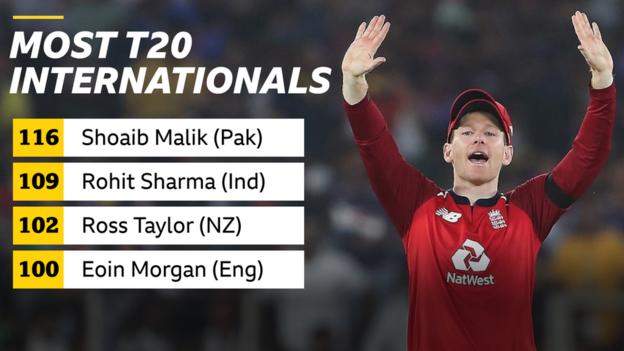 England captain Eoin Morgan said he was close to tears when Jos Buttler presented him with a special cap to mark his 100th Twenty20 international.

Morgan, 34, became the first England player to reach 100 caps in the eight-wicket victory over India on Tuesday.

"His words warmed my heart and I'm very grateful for that," said Morgan.

"It nearly brought me to tears. It meant a huge amount. He's a great friend of mine. Our families are quite close.

"Playing in 100 games is a really proud moment for me."

Vice-captain Buttler made the presentation before the third T20 in Ahmedabad.

"I tried to get across what a special achievement it is and what he's done for English white-ball cricket," said Buttler, who made an unbeaten 83 off 52 balls to help put England 2-1 up in the five-match series.

"He's always been ahead of the curve, alongside Kevin Pietersen. They were the two guys that I always looked to in white-ball teams who could do it a bit differently."

Buttler has opened the batting in his past 16 T20s for England, having spent the majority of his 77-game career in the middle order.

On the debate over his best position, Buttler said: "People seem to quite enjoy talking about it. I certainly sometimes feel the pressure of that.

"Every time I do have the opportunity, you want to make a case because there are loads of us that can open the batting.

"I've got the full backing from Morgs and that gives me a lot of confidence."

England will wrap up the series with victory in Thursday's fourth match at the same venue.