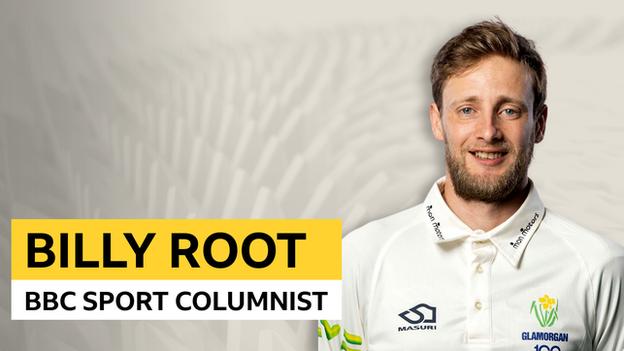 In his first BBC Sport column, Glamorgan batsman Billy Root prepares to face his older brother and England captain Joe for the first time in a County Championship match when the Welsh side travel to face Yorkshire. Billy came through the Yorkshire age-group system but played his last second-team game there in 2013.

The first day of the County Championship season is always something special. This time it just so happens that I will be playing against my older brother when Glamorgan travel up to face Yorkshire.

First and foremost, it will be nice to see Joe. The last time I saw him was September and he has since been away with England in Sri Lanka and India.

He's been back for about three weeks, so it's been a long trip. I'm sure he's glad to be back and I know how much he loves playing for Yorkshire, so it should be a good week.

The way the fixtures fell, their opening game was against Glamorgan and I'm sure he would have wanted to play this one especially.

We both will say this is just another game of County Championship cricket and there is a job to be done which is true, but there is a little bit more on it for us personally.

But while it will be nice to play against Joe, this is not about us. This is a game between Yorkshire and Glamorgan, who we will be representing.

I've not played against Joe for a while and this will be the first time in the County Championship. The last time we were on opposing sides was a Royal London One-Day game in 2017 when Joe guided Yorkshire to victory against Nottinghamshire, who I was playing for at the time.

We were outplayed on that day. We lost the toss on a tricky wicket in the morning and they bowled well. Joe made the run chase look pretty easy as he does, no matter how well James Pattinson and Stuart Broad bowled at him.

I also bowled at him right at the end. I tried to tease him into doing something silly but he didn't take the bait and ended up hitting a six off me to win the game.

I think there's a very good chance he'll be bowling at me at some stage this week, if I'm there long enough for him to have a go. He'll definitely fancy bowling his off-spin to a left-hander so we will see.

I'd say it's maybe about three times in all that I have played against him. Me and my dad played against him for Sheffield Collegiate when Joe was playing in the academy side and one of those games was at Headingley as well.

I don't think I have actually beaten him yet. We'll have to change that this week!

It will be an interesting few days for the family. I'd like to think they will stay neutral! It is a shame they can't be in the ground to watch but I'm sure they'll have the live stream on and will be cheering us both on.

They'll be wanting us to do well, score a few runs and hope a good game will develop over the four days.

I suppose we could let Joe have a few runs. If he doesn't get any then he doesn't get any, that'll work well for us! He's scored enough this winter for England so he'll want to save a few for the Test series. Just a Glamorgan win will do for me.

Playing against him will bring back memories of the days in the garden when we used to play against each other, as brothers do. Being the youngest one, I always ended up bowling.

It was his bat, his ball. If I ever was allowed to get a chance to bat, we were probably finished for the day by then.

I'm not going to chirp him this week on the field unless he comes at me with something funny first, and then I'll have to get him back. It'll all be in good spirits.

It will be both of us doing what we can to win the game. I'm sure it'll be nothing short of very professional! There'll be the odd joke here and there, but it'll be light-hearted and in good spirits.

What you see on the pitch is what you get with Joe. He is very calm, quite calculated in his decision-making and you'll see he always plays the game with a smile on his face.

That's pretty much him in normal life as well. He is a down-to-earth guy and a great role model to have as a big brother.

I am very proud of him and it has been great to see him reach 100 Test matches as well this year. That pride will never change. Even this week!

I will also be proud to be playing at Headingley. It's always going to be a great place for me to go, so I'm just going to try to enjoy every minute.

I've not been back for a while, since the new stand has been built and I am excited to see what it's like.

I'm sure it'll all feel very familiar once I get back there. I think we're actually changing in one of the lecture theatres that I would've been in while I was at university there, so it's funny how things work out.

Not many of the Glamorgan lads will have played a County Championship game there and it is a great chance for us to make a good start.

It's an exciting time of the year for everyone with the championship coming back around, especially this year with last summer being a short season. It has felt like one of the longest pre-seasons ever.

The boys are in good shape and everybody's just ready to get going now. It's looking very exciting for us, especially after the first couple of games outside.

The guys have worked over the winter and the whole squad has come a long way, so I'm excited about this year - I think we're looking good.

I am just so proud of the Glamorgan boys for the hard work they've put in this winter and everyone is raring to go.