Lancashire moved to the top of the Group Three table despite a thoroughly frustrating visit to Northamptonshire.

Only 6.2 overs were possible on the final day - and just 34.3 overs in the entire match - at Wantage Road.

Alex Davies had time to reach his fourth half-century of the season and was 51 not out when the umpires called the game off, with Luke Wells on seven.

The visitors are three points clear of Yorkshire ahead of the Roses match at Old Trafford, which starts on Thursday. 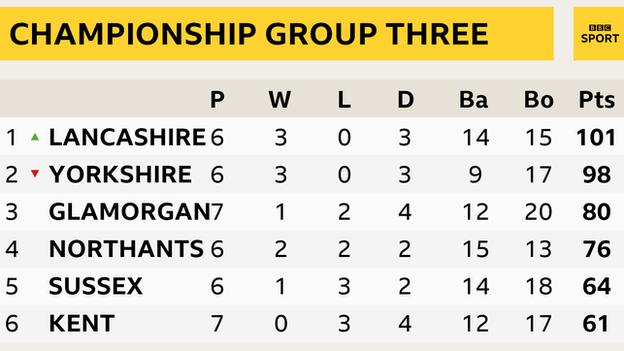 "The weather has beaten us. The groundstaff have been fantastic doing their best to get us on when they could, but it's just one of those things.

"Ben Sanderson and Gareth Berg have bowled really well all year as a partnership and in the periods we were out there they bowled well again. They went passed the bat and didn't get their rewards.

"The closer we get to the end of this section of the competition teams might be trying to set up run chases to get results. We have got to get first innings runs which will be the key to setting up those games."

"It's terrible when you come to a ground like this, see such a nice pitch and then you don't get much cricket on it.

"Guys like Jimmy Anderson needed overs. That was the main thing for him going towards the Test match. We won't have Jimmy against Yorkshire. He'll be back in the England bubble on Friday.

"The bowlers have had a heavy workload this season with the schedule, but saying that we had a week off last week and now this game here. We've topped up with a few overs in the mornings in the indoor centre and we're fresh and ready for the next two games."