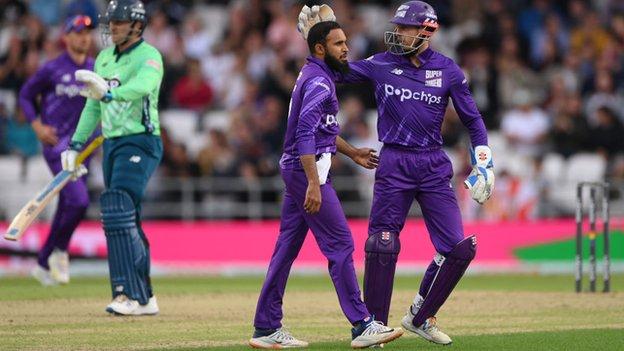 Superchargers chased down the target with three balls to spare, thanks in large to Harry Brook's 47 off 30 balls.

The victory is Superchargers' first of the competition as they climb from bottom to fifth in the table, one place behind Invincibles.

The win took Superchargers' women - who are yet to lose in the competition - to the top of the table, with Invincibles in third place.

On his home ground, Yorkshireman Rashid made the most of a pitch which favoured the spinners.

Rashid's three wickets included two in consecutive balls; first he invited a top edge from Laurie Evans which was caught at mid-wicket, followed by a first-ball duck for Jordan Clark who edged to slip.

In contrast, it took a while for his World Cup-winning England team-mate Roy to get going.

As wickets fell around him, the Invincibles opener struggled to find rhythm for the majority of his innings.

Roy dropped his bat in frustration before a strategic timeout was taken after 70 balls, at which point he had scored an uncharacteristic 23 from 30 balls.

He finally let off the fireworks in balls 98 to 100, hitting David Willey for two sixes and a four to reach his half-century, but was it a case of too little too late?

Brook impressed with a scintillating 62 from 31 balls against Welsh Fire, but his side lost.

He hit a handy 38 from 30 against Trent Rockets, but his side lost.

At the third attempt of trying the 22-year-old - who Ben Stokes has tipped as a future England player - put in a performance not in vain.

He batted with patience and purpose in equal measure, scoring five boundaries and one six.

A game of fine margins

Another day, another Hundred tie which could have gone either way.

Cricket was already a game of fine margins, but with such a short format the advantage can swing back and forth within a matter of balls, and one mistake can be costly.

Here, we take a look at some of the key moments late on:

Rodrigues is human after all & Davidson-Richard's heroics

India batter Jemimah Rodrigues has undoubtedly been the star of The Hundred.

In her first game, she blasted 92 off 43 balls as Superchargers beat Welsh Fire and followed that with a match-winning 60 from 41 deliveries against Trent Rockets.

The early signs in Leeds pointed to yet another Rodrigues masterclass - on ball six she welcomed Tash Farrant to the game with the most luxurious drive through the off side; two balls later she unleashed the sweetest of punches down the ground.

But, much to the dismay of the Headingley crowd - and her 438,000 Instagram followers - social media sensation Rodrigues was caught behind off the bowling of Mady Villiers, a decision which was originally given not out before Invincibles reviewed.

As the old adage goes, you only know what a good score is once both sides have batted and Davidson-Richards managed to score boundaries - five of them in fact - and work the singles on a pitch which suited the bowlers.

And with the ball, she held her nerve to finish with figures of 2-19 from 20 deliveries.

For Superchargers, it showed they can win even when their star batter Rodrigues misses out.

Capsey, by law, is too young to get behind the wheel of a car in the United Kingdom but the 16-year-old does not need any 'L' plates when it comes to cricket.

Having hit 59 from 41 balls in her team's win over rivals London Spirit, Capsey only managed eight with the bat today but it was her off-spin that stole the show.

Opening the bowling, she piled the pressure on Superchargers batters who just couldn't get her away.

Capsey was duly rewarded with two wickets when she had Laura Wolvaardt edging behind for 27 then, two balls later, was celebrating a caught and bowled wicket from Bess Heath.

Despite the loss, it was another fine outing for Capsey.