Welsh Fire ended their men's Hundred campaign on a high by beating London Spirit in Cardiff in a gripping final game of the group stages.

Glenn Phillips hit a blistering 80 off 35 balls as Fire chased down an imposing 164 with two balls to spare.

In a battle of the two lowest-placed teams in the competition, Josh Inglis had earlier smashed 72 off 45 balls for Spirit.

Welsh Fire got off to the worst possible start, falling to 2-2 and then 20-3 before Phillips' fireworks.

The New Zealander at one stage looked well set to become the first player to score a hundred in The Hundred.

Eoin Morgan's Spirit end the tournament bottom of the group stage with just one win from eight matches, with Welsh Fire one place above in seventh. 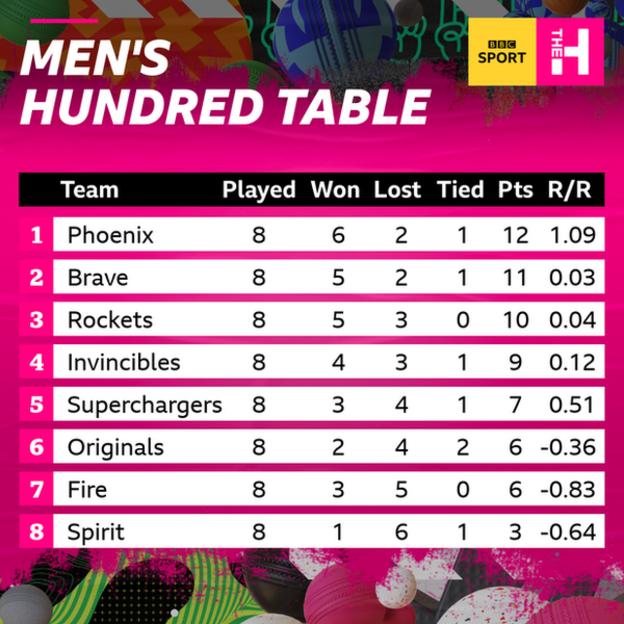 Before the tournament, Manchester Originals all-rounder and BBC Cricket pundit Carlos Brathwaite picked Phillips as a player to watch in The Hundred.

Today we saw exactly why.

From the moment he walked to the the crease, Phillips had one thing in mind - boundaries, and lots of them.

With 62 of his runs coming from fours and sixes, the Cardiff crowd were duly entertained.

Fire fans - and perhaps even the neutrals - were eager for Phillips to score a century and place his name in the record books.

But when Phillips was caught on the deep square-leg boundary, having scored the fourth highest score in the men's competition, a chorus of sighs echoed around Sophie Gardens.

The wait for the first player to reach three figures in the Hundred goes on.

With a total four matches across both the men's and women's competition remaining, will we see it happen this year?

Heading into the final game of the group stages, both teams had just two things to play for: pride and not finishing last.

Without the added pressure of needing points or fighting for qualification, Spirit played their part in a wonderful match with Inglis leading the way.

His knock included seven boundaries and three sixes, as the Leeds-born Australian hit the ball to all sections of the ground.

But Spirit finish their Hundred campaign with the unwanted figurative wooden spoon.

With legend of the game Shane Warne as head coach, World Cup-winning skipper Eoin Morgan in charge and a mix of experienced domestic players and international stars, they will be disappointed with their showing in the competition.