Joe Root is in the sort of form that would make Midas look out of touch.

The England captain's sublime 121 off 165 balls on the second day of the third Test against India at Emerald Headingley was his third century of the series and sixth of the year.

Not only that, but the ease with which he is racking up the runs makes you wonder if England have ever had it so good…

'The best in the world right now'

Opener Haseeb Hameed, who made 68, described Root as "probably the best player in the world right now".

"He is unbelievable," Hameed told BBC Sport. "The last 12 months he has taken his game to a different level.

"Everybody in the dressing room looks up to him and he keeps delivering."

Dawid Malan, who scored 70 and added 139 with Root for the fourth wicket, said: "He's phenomenal. He just scores runs all the time.

"He moves his feet so well. He hits the ball so much later than most people.

"If you look at all the greats, as soon as you miss your line and length, they hurt you, and Joe is one of those.

"It's great to have the best seat in the house when he plays as well as he does there."

Former England captain Michael Vaughan also made six Test centuries in 2002, a record he and Root share with Denis Compton in 1947.

"There can't be that many that have played as well as this consistently for so long in an England jersey," Vaughan told TMS.

"You knew from the time Joe Root got to about six that he would get to 100." 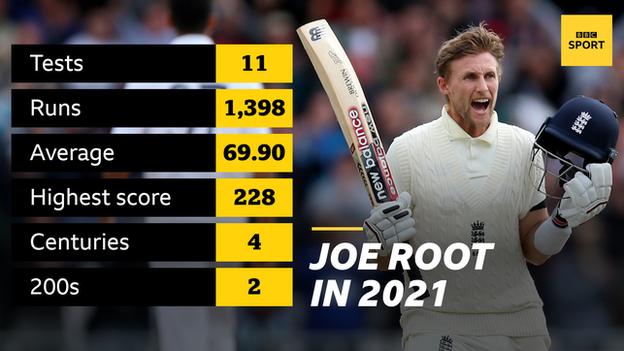 The year of the Root

Root's 1,398 runs put him fourth on the list of runs scored by an England batsman in a calendar year. Of the three players ahead of him, one is Root himself.

Root, though, could play another five Tests this year, so it seems certain he will end 2021 at the head of the list.

His six hundreds ties an England record shared by Vaughan and Compton, in 1947, and he has made centuries in three consecutive Tests not once but twice this year.

What makes Root's run-scoring all the more remarkable is the performance of his team-mates.

In fact, Root has scored more runs in two-and-a-half Tests of this India series alone - 507 - than any other England batsman has managed all year.

What other records could Root break?

With two more Tests against India and three of the five in Australia to come in 2021, Root could have his eye on the all-time record in a calendar year.

Speaking of Tendulkar, Root may also have an outside chance of breaking the India legend's record for most Test runs by a batsman. 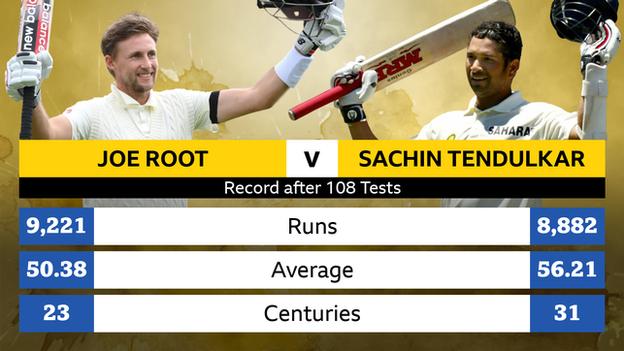 Root is also primed to surpass Alastair Cook's all-time England record of 12,472 Test runs. Once he does that, only India's Rahul Dravid, Jacques Kallis of South Africa and Ponting will stand between him and Tendulkar.

Is there anything Root can't do?

Such has been Root's mastery with the bat this summer that we asked the BBC Sport readers if there was anything else that he could turn his hand to...

David in Cramlington: Joe Root could be the voice of the speaking clock as his timing is immaculate.

John Rodway: All summer Joe Root has been batting out of this world. He would be an excellent astronaut.

Sam: Joe Root could win Love Island by himself.

Mark Dorey: I think Joe Root could do it on a cold wet windy Tuesday night in Stoke.

Charles: Wonder if he can take penalties as well.

Derrick in Fort William: Joe Root could make Meat Loaf do that.

Archie in Battersea: I don't want to get ahead of myself but surely Root is an absolute guarantee for winning SPOTY this year. He'll end the year top of the Test batting rankings, a 3-1 series win against India and a 5-0 series win down under.

On any other day, you'd say Archie was getting carried away.

But with Root in form like this, maybe you can't quite rule it out...