New Zealand captain Sophie Devine celebrated her 100th Twenty20 international appearance with a match-winning half-century to set up a four-wicket victory over a sloppy and lacklustre England at Hove.

An excellent Mady Villiers catch dismissed her, before the off-spinner took a superb return catch and another on the boundary - but the White Ferns made it over the line with 10 balls to spare.

Earlier, England stuttered to 127-7 from their 20 overs, with opener Danni Wyatt making an assured 35, while debutant Maia Bouchier - who came in for Emma Lamb - showed promise with a well-made 25.

The final game in the three-match series is on Thursday at Taunton. 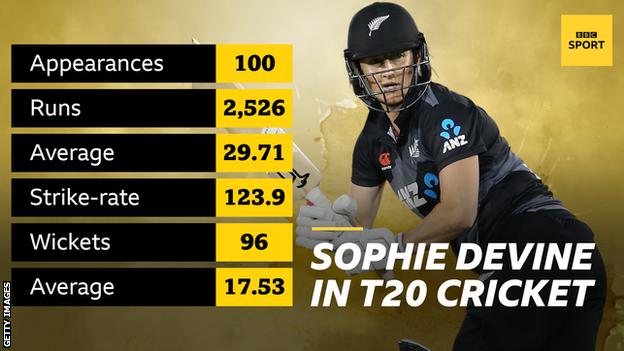 Where do you start with Devine? Whether it is with the bat, ball or in the field, she more or less always finds a way to influence the game.

After claiming the key wickets of Nat Sciver and Amy Jones from successive balls, her display with the bat saw her at her dominant, powerful best.

Devine, who has also represented New Zealand in hockey, was typically strong over the leg side - hitting four massive sixes, including one out of the ground - as she took apart England's below-par total.

The 32-year-old, who took a break from the game for mental health reasons in March, was dropped on 25 by Sarah Glenn at short fine leg, and capitalised on that to give her side the platform to win the game.

Her dismissal prompted a collapse of four wickets for 24 runs, but the visitors were always ahead of the game thanks to her efforts with the bat.

A delighted Devine said: "Winning is a habit. There were some nerves, but we had full confidence the girls would get the job done.

"We know we're growing and it is nice to put it all together, and to bounce back quickly from the first game."

Ill-disciplined England struggle in the field

England, who were without captain Heather Knight as she continues her recovery from a hamstring injury, rested Katherine Brunt, with the 36-year-old replaced by the 25-year-old Freya Davies, leaving the attack short of experience.

Before Saturday night, Sophie Ecclestone had played 46 T20 internationals, but Glenn had only played 22, Villiers and Tash Farrant 16 each, and Davies 14.

And the result was an ill-disciplined performance. There were an inexcusable 19 wides - something with which coach Lisa Keightley will be extremely unhappy.

The margin of victory would have been much bigger were it not for Villiers - she superbly ran out Suzie Bates, before three excellent catches gave England a sniff of an unlikely win.

Despite the late pressure, England paid for losing regular wickets, as well as their ill-discipline with the ball, and were deservedly beaten.

While Brunt may well return for the final game, lessons must be learned from defeats like Saturday's as England build for the next 20-over World Cup in 2023.

New Zealand much improved in the field 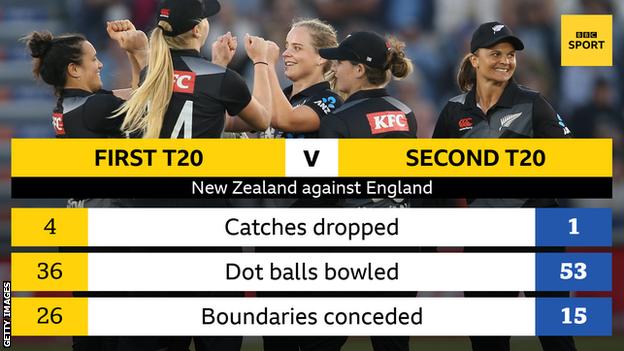 The White Ferns were rusty in the opening game, having not played any competitive cricket since April. In that time England's XI had played 216 games between them, across their series against India, as well as The Hundred and regional domestic competitions.

The tourists' bowlers offered too much width on Wednesday, were slow to adjust in the field, and dropped catches. After winning the toss on Saturday, Devine spoke about wanting to bowl a tighter line, and her side delivered.

Jess Kerr bowled the in-form Tammy Beaumont, who made a match-winning 97 on Wednesday, while Wyatt, caught at short third by Kerr, and Bouchier, who was caught behind, were both cramped for room and done by extra bounce from the impressive Rowe.

It is a cliche, but catches win matches. Beaumont was dropped twice in the first game, but on Saturday good catches saw the back of Sciver, at deep square leg, and Jones, in the covers, in successive balls and put the White Ferns in control of the game.

Southern Vipers player Emily Windsor, commentating on BBC Radio 5 Live Sports Extra, said: "What has been more noticeable in this game is that New Zealand seem to have set bowling plans to batters.

"They seem to have been a lot clearer today."