But life is what happens when you're making other plans and, in England's case, only one home Test win this summer represents their worst return since 1999.

Rightly or wrongly, English Test cricket is built around the Ashes. Legacies are made by success against Australia, reputations tarnished by failure.

For the entirety of 2021, England have told us they have been looking to peak for their two headline assignments at the end of the year. The Ashes for Joe Root's red-ball team, the T20 World Cup for the white-ballers.

Eoin Morgan's limited-overs set-up is in such rude health it can seamlessly deal with the losses of Ben Stokes and Jofra Archer by calling on Liam Livingstone and Tymal Mills.

In contrast, the Test team are flying by the seat of their white pants.

While no-one could have foreseen all-rounder Stokes' indefinite break from the game, and injuries to Archer and an entire battery of fast bowlers are unfortunate, time invested in a callow batting line-up has not yielded a return and decisions over the spin-bowling department have been lacking logic.

The difficulty of looking too far ahead while the planet is gripped by a pandemic has been laid bare by the cancellation of the final Test against India. That is before you take into account the uncertainty over which England players will actually make themselves available for the Ashes, given the doubts over whether their families will be allowed to travel.

This time last year Dom Sibley, Zak Crawley and Ollie Pope seemed set to be half of England's Ashes top six in what would have been the culmination of a two-year build-up for the trio of young batsmen.

After a confidence-draining winter in India, Sibley and Crawley were moved aside over the course of the home summer and Pope is only on the fringe of the first XI.

If the numbers are slightly improved, there is still a sense of shuffling the deckchairs. Then again, when you consider that Sam Robson averaged 30.54 and Gary Ballance a relatively whopping 37.45, England's deckchairs haven't been still for the best part of a decade. 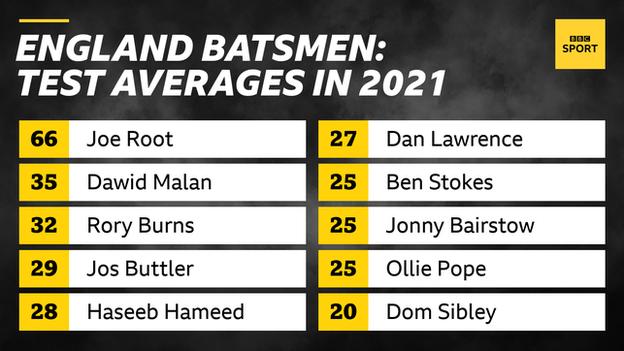 While the absence of Stokes - a force of nature - creates its own black hole, it has also had a knock-on for England's spinners.

Jack Leach usurped Dom Bess as first-choice during the winter, but was left out at the beginning of the summer as England tried to balance a Stokes-less team.

Moeen Ali's all-round talents were summoned as a solution and Root is now talking of Moeen as the number-one spinner, meaning Leach has been relegated despite not bowling a single delivery in a home Test for two years.

There must have been times when England's fast bowlers worried they had been caught up in a Final Destination movie, such was the regularity with which they were taken down by injuries.

Archer, Stuart Broad, Chris Woakes, Mark Wood, Olly Stone, Saqib Mahmood and Brydon Carse were all struck at various points. When Craig Overton was picked for the third Test against India at Headingley, he was arguably England's ninth-choice seamer, but acquitted himself nicely.

Through it all emerged Ollie Robinson, who has taken to Test cricket even more naturally than his illustrious team-mates Broad and James Anderson.

Still, by the end of the summer, Robinson formed part of a four-man, right-armed, fast-medium pace attack that was supplemented by Moeen's off-spin. We have read this book before and it does not have a happy ending.

With no more Test cricket between now and December, where does this leave England with regard to their Ashes planning? Worryingly close to the team beaten 4-0 in Australia four years ago. 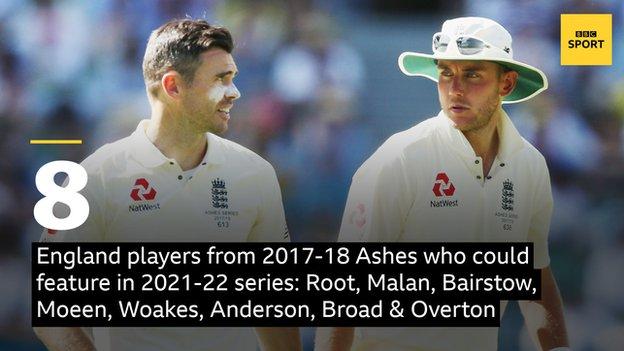 On the plus side, Malan was England's highest run-scorer in 2017-18 and Bairstow, who could end up taking the gloves on his third Ashes tour, joined him in making a century at the Waca.

However, whereas Alastair Cook and Mark Stoneman had just three Tests as an opening pair before the Ashes, Hameed and Rory Burns have had only two, even if they shared two century stands.

Hameed's orthodox technique is far more reassuring than Sibley's cubism, but a picture-perfect forward defence might be as much use in Australia as factor four suncream when Pat Cummins starts using Hameed's eyebrows for target practice.

As ever, England's batting will largely depend on Root, the man who has scored three times the runs of any of his team-mates in 2021.

Root has never made a century in nine Tests in Australia. If that does not change, it is hard to see England returning home with anything other than a heavy defeat.

England could yet have Anderson and Broad opening the bowling in the first Test at the Gabba for the fourth successive Ashes tour. Despite their timeless class, Anderson has won only three of his 18 Tests in Australia, Broad one of 12.

For all of the hope England might be able to fight pace with pace, and the qualities that suggest Robinson could do well in Australia, they are once again in danger of arriving at a gunfight armed only with knives.

They must get Wood through the World Cup unscathed, then pack him very delicately off to Australia in a box marked 'fast bowler: handle with care'.

With Australia notoriously unforgiving for visiting off-spinners, Moeen's wickets in 11 Tests against them have cost almost 65 runs apiece.

Perhaps most crucially, England could be without Stokes for non-cricketing reasons for the second successive Ashes tour.

If this paints a bleak picture, it's not all roses and baggy green in the Australia garden either.

By the time the Ashes starts, they will have played only four Tests in almost two years. With Australia's November Test against Afghanistan under threat, England's intra-squad games involving the England Lions might actually give the tourists a more productive warm-up than the hosts.

There is disquiet around the position of Australia coach Justin Langer, which will only get louder if they have a poor World Cup, while captain Tim Paine will be coming back from neck surgery.

Preparation isn't always everything. New Year's Eve rarely lives up to the hype, but turning up to the pub for a quiet pint can turn into the most memorable night out.

England have no choice but to hope it will be alright on the Ashes flight.