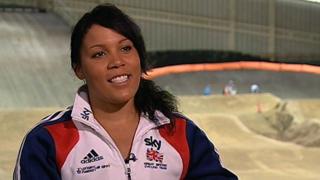 BMX world champion Shanaze Reade says that she is using her failed bid for gold in Beijing as a motivating tool for success at London 2012.

The British rider was favourite at the 2008 Olympics, before a crash in the final ruined her hopes of a medal.

Reade takes part in the BMX 2012 test event at the Olympic Park in Stratford on 19 and 20 August.

You can watch a special Olympic Countdown programme on BBC Two on Sunday at 1300 BST.