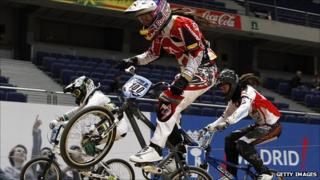 World champion Mariana Pajon will compete on the Olympic BMX track for the first time at the 2012 test event 19-20 August.

Great Britain's three-time world champion Shanaze Reade is one of her idols.

You can watch a special Olympic Countdown programme on BBC Two on Sunday at 1300 BST.