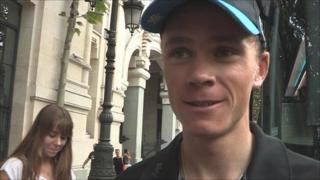 Britain's Chris Froome tells BBC Sport's Nick Hope he has made a big step forward in finishing second at the Vuelta a Espana.

Froome's team-mate Bradley Wiggins finished third - the first time there have ever been two Britons on the podium together at one of cycling's 'grand tours' - the Giro d'Italia, Tour de France, and Vuelta a Espana.