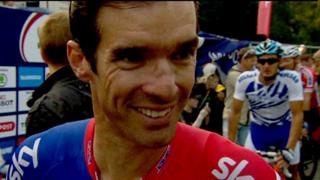 The 34-year-old Scot captained the squad which helped the Manx sprinter to the world title in Copenhagen.