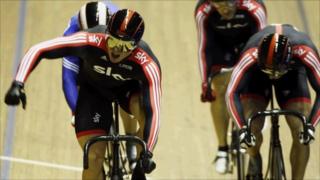 Sir Chris Hoy tells BBC Sport he feels 'stronger than ever' as he wins the British national Keirin title to begin a track cycling season which will culminate in the Olympic Games in London.

Hoy, 35, is looking to defend three Olympic titles at London 2012 but faces stiff competition both from other nations and from team-mates such as Jason Kenny.

"Last week I hit a personal best in the gym, [better than] before Beijing or Athens," said Hoy. "I'm stronger than ever. Lifting weights isn't riding a bike, though, it's part of the overall picture."

British Cycling's performance director, Dave Brailsford, added: "He's in great shape, he really has got himself in good nick. That's the best I've seen Chris for a long time."