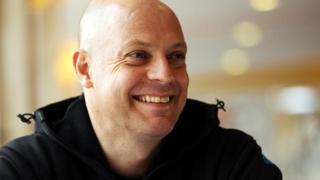 Team Sky can take Cavendish to 'another level'

Team Sky principal Dave Brailsford says they "worked very hard" to sign Mark Cavendish and believes his acquisition will also be a benefit for Team GB at next year's Olympic Games in London.

Brailsford adds that riding for Team Sky can take the world road race champion to "another level" and that most teams in the world would like to have him.