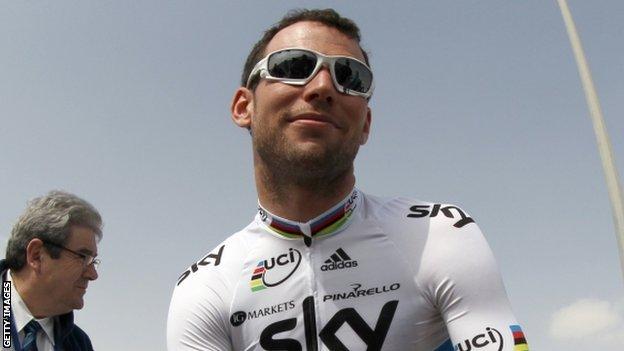 Cavendish, outsprinted Belgian race leader Tom Boonen at the end of the 146.5km stage from Dukhan to Al Gharafa Stadium.

"Hopefully I can get on a roll now and win some things."

Cavendish was in a lead group of around 30 riders when crosswinds split the peloton into three groups 30km from the finish.

But he was helped in the leading bunch by team-mates Bernhard Eisel and Juan Antonio Flecha before timing his finish to perfection.

"I was well looked after by Bernie and Flecha, keeping me in position," said Cavendish.

"I wanted to come off Boonen's wheel but then [Aidis] Kruopis from GreenEDGE came over on the right and boxed me in. I had to swing out and I wanted to wait for the headwind finish so left it late and came past Boonen."

Cavendish's victory has moved him up to third in the overall standings, eight seconds behind leader Omega Pharma-Quick Step rider Boonen, who won the opening stage, and two seconds behind Garmin's Tyler Farrar.

Wednesday's fourth stage will cover 144km from Al Thakira to Madinat Al Shamal in the north of the country.