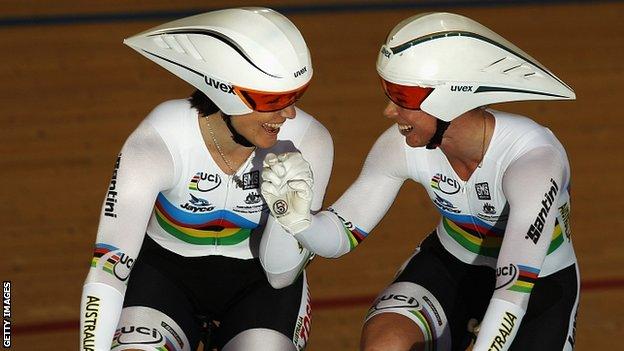 Victoria Pendleton and Jess Varnish set a new British record of 32.966 and will take on the world champions for gold.

The final will be shown live on BBC Sport later on Friday.

"We're going to go faster tonight, I'm confident of that," said McCulloch. "I was a little bit nervous for the first one."

Meares, the reigning world champion in the team sprint, individual sprint and keirin, added: "This is the best possible outcome we could be having - an Australia-British final. This is the closest thing to what will happen at the Olympic Games, racing them in the final."

Fast times are expected at the new velodrome, which was designed by Australian Ron Webb with record-breaking performances in mind.

The World Cup meeting is the first competitive event at the 6,000-seat venue, and the track suffered its first damage when a four-rider crash during the men's omnium event forced the race to be suspended for a few minutes while repairs were carried out.

Coverage on Saturday and Sunday (all times GMT):