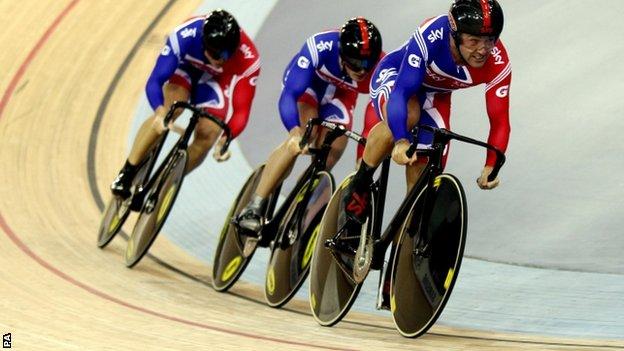 Ross Edgar will miss April's World Championships in Melbourne as 19-year-old Philip Hindes gets the chance to stake a claim for an Olympic place.

Sir Chris Hoy will lead a team of 15 riders when Great Britain compete at the last major track cycling event before this summer's Olympic Games.

Edgar was part of at last week's World Cup event in London.

But he has been left out the Melbourne squad to pursue gym and road training.

Britain topped the medals table at the World Cup but the men's team sprint performance was disappointing, with the line-up of Edgar, Jason Kenny and Hoy losing at the semi-final stage.

Matthew Crampton and the German-born Hindes will vie for the now-vacant place on the team in Melbourne, with performances set to play a major part in Olympic selection decisions.

"We have selected a very similar team to travel to the World Championships; the only difference is in the men's sprint squad," said Dave Brailsford, British Cycling performance director.

"In London, Ross Edgar was in the early stages of recovering from an injury and we think the best option for him now is to focus his training in the gym and on the road over the next few months and as such he won't travel to Australia - this doesn't mean we have ruled him out of selection for the Olympic Games.

"The sprint coaches also feel that Philip Hindes has shown great potential in training and therefore it would be good for his development to shadow the World Championships team this year."

Victoria Pendleton and Jess Varnish are likely to face Anna Meares and Kaarle McCulloch in the women's team sprint once again, having also broken the world record as they beat the Australians to gold at the World Cup.