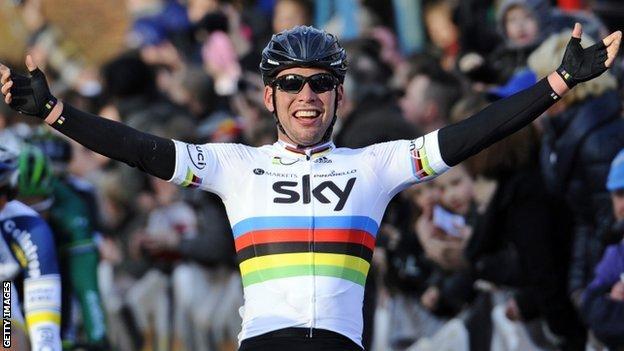 Team Sky's Mark Cavendish overcame illness to sprint to victory in the 195km Kuurne-Brussels-Kuurne one-day race in Belgium on Sunday.

Britain's world road race champion was perfectly delivered to within 250m of the line by team-mate Chris Sutton before sprinting away from the field.

"When I got to the final corner, I knew we'd win," said Cavendish who also won two stages in February's Tour of Qatar.

"I was ill all day and kept vomiting," the 26-year-old added.

"I talked to CJ [Sutton] after the climbs and I told him you should be prepared to sprint.

"With 50km left I still didn't feel marvellous but just kept going and was being kept out of trouble all the time.

"They controlled it at the end to deliver me and with 250m to go I kicked and that was it."

Sky riders controlled the race from the off with Juan Antonio Flecha and Mathew Hayman joining a breakaway group.

When that group was caught with around 60km remaining, another breakaway attempt was covered by Bernhard Eisel as Sky worked tirelessly to keep Cavendish in with a shout of victory.

Alex Dowsett, Jeremy Hunt, Eisel, Flecha, Ian Stannard and Hayman then led out Cavendish in the closing stages with Sutton sitting behind and prepared to sprint if his leader could not.

"The team worked the whole day for me," he said. "The break went, when we got it back, they started riding immediately and just stayed there to the finish. I'm so proud."

A clearly delighted Cavendish then tweeted after the race: "First win in Europe this year. Absolutely buzzing. Team Sky controlled it like a video game. Looks like the train is on track. So proud."

Cavendish's win is a second successive victory in the race for Team Sky after Sutton won in 2011.

And the Australian added on Twitter: "What a day. Team Sky was so strong. The boys gave the perfect lead out. I dropped Mark Cavendish with 250m to go. What a win. Congrats Cav."