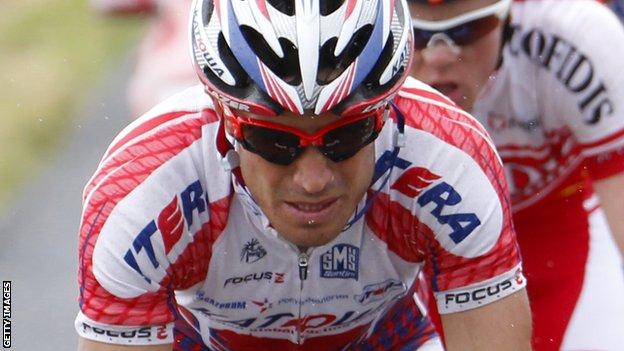 Alexandr Kolobnev has been cleared of intentional doping after failing a drug test during the 2011 Tour de France.

The Russian, 30, had tested positive for hydrochlorothiazide and had to withdraw at the fifth stage.

The Court of Arbitration for Sport (CAS) said that the use of the drug was justified by 'medical reasons unrelated to performance'.

Kolobnev was fined £1,040, ordered to pay costs and given a warning, but avoided a suspension.

The 2008 Olympics bronze medallist was the only rider to fail a test on the 2011 tour.

CAS rejected an appeal by the Union Cycliste Internationale - accepting medical evidence that taking hydrochlorothiazide for a long-standing vascular condition was the reason for Kolobnev testing positive.

But they upheld a Russian tribunal verdict which issued a reprimand and fine.

The statement said: "The product, recommended by Kolobnev's doctor in 2009, had actually been indicated to supplement vascular disease affecting the athlete, and not assist the athlete in recovering from physical effort or better prepare for a sporting performance."

The Russian is currently without a ride after he left team Katkusha following the 2011 Tour de France.