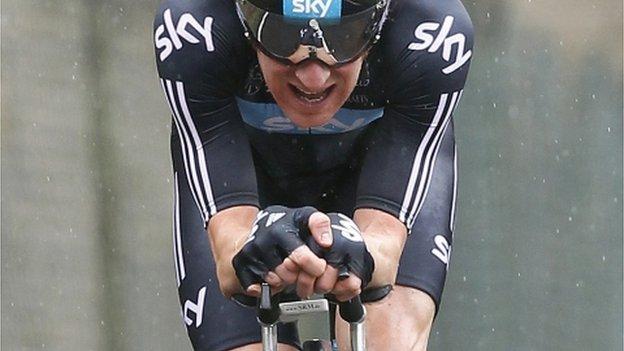 Britain's Bradley Wiggins defied the wet conditions to finish second in the 9.4km opening time-trial stage of the Paris-Nice race on Sunday.

Wiggins completed the course in 11 minutes, 20 seconds, one second behind Sweden's Gustav Larsson who posted his time before the rain started to fall.

The Team Sky rider said: "I didn't take any risks in the corners but I knew in a straight line I was flying.

"Now it's about staying safe. This race is known for having a lot of crashes."

Despite being named "the Race to the Sun", the Paris-Nice event is renowned for its often unfavourable weather conditions and numerous hills.

"I wasn't willing to find out whether it was slippery so I never really pushed it as hard as I could have done in the corners," added Wiggins.

"I'd already slipped on the ramp coming off the start, so straight away I had one mind on safety in the corners. Fortunately there weren't so many corners so it wasn't as decisive."

To put Wiggins' performance into context, defending champion Tony Martin, who was the last man to tackle the course, two riders after the Brit, finished 25 seconds off the pace.

Monday's second stage is a largely flat 185.5km race from Mantes-la-Jolie to Orleans

The eight-stage race culminates on 11 March with a 9.6km time trial that finishes on top of the Col d'Eze, which returns to the route after an absence of more than a decade.