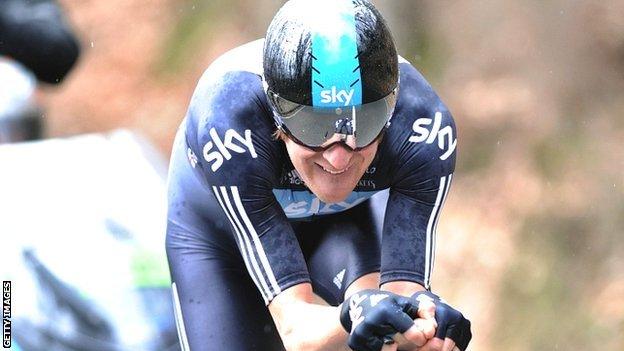 Britain's Bradley Wiggins took the overall lead in the Paris-Nice race after finishing 11th in the second stage from Mantes-la-Jolie to Orleans.

The 31-year-old Team Sky rider, who began in second place, was part of a 21-man break which finished two minutes, 29 seconds ahead of the pack.

The stage was won by Belgium's Tom Boonen ahead of Spain's Jose Joaquin Rojas and Germany's John Degenkolb.

"There were a lot of crashes and we're a bit battered and bruised. The weather plays a massive part, the roundabouts are slippery and there were people crashing.

"You're always a couple of seconds away from potentially losing everything, once you go down you're not going to come back to the front so you're riding a tightrope the whole day - it's a relief to be finished and on the bus."

The race marks an important step on Wiggins' preparation for the Tour de France this summer.

"We're in great shape, the winter's gone well and we're here to win the race, it's a big stepping stone towards July," added Wiggins. "I'm in the shape of my life, the coaching team have pushed me hard all winter - the goal is July and our condition and form is fantastic."

After the generally flat second was affected by strong crosswinds which played a part in dividing the peloton early in the second half of the race.

With previous leader Swede Gustav Larsson separated from the leading pack, along with Luxembourg's Andy Schleck and defending champion Tony Martin of Germany, Wiggins seized his chance, further helping his cause by taking the bonus three seconds courtesy of the day's intermediate sprint.

Wiggins was ably assisted throughout by Team Sky colleague and fellow Briton Geraint Thomas, who at one stage looked capable of taking the stage in the closing sprint but ultimately had to settle for 10th.

In Tuesday's third stage, the riders will trek 194km from Vierzon to Le Lac de Vassiviere.