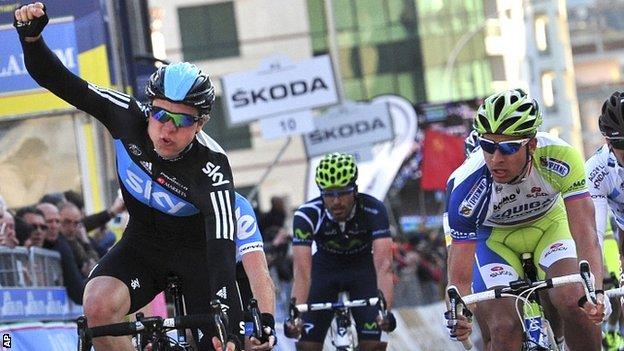 Mark Cavendish was outshone by his Team Sky team-mate on the third stage of the Tirreno-Adriatico as Edvald Boasson Hagen sprinted to victory.

Cavendish, picked up a two-second bonus by winning an intermediary sprint, but did not feature in the day's finale.

"I was supposed to be his leadout man but he wasn't feeling so great," said Boasson Hagen.

Germany's Andre Greipel was second with Matthew Goss still in the overall lead.

Cavendish, said Boasson Hagen could also be a contender for the season's opening single-day classic - the Milan-San Remo - on 17 March.

"It was better for Boasson Hagen today. The team is strong. It could be me or it could be him,'' he said.

The Tirreno-Adriatico ends on Tuesday with a 5.78-mile individual time trial in San Benedetto del Tronto, on the Adriatic coast.