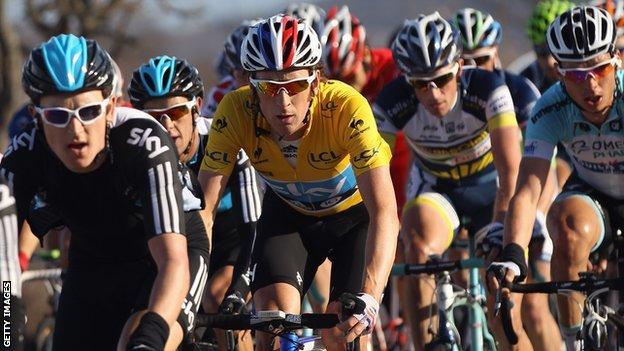 Britain's Bradley Wiggins will target the Paris-Nice race title on Sunday, having maintained a six-second lead during Saturday's penultimate stage.

Belgian Thomas De Gendt was victorious on stage seven from Sisteron to Nice, ahead of Rein Taaramae of Estonia.

One of Wiggins's rivals, American Levi Leipheimer, began the stage in third place overall but crashed three times and fell several places behind.

But in the overall standings, he leads Dutchman Lieuwe Westra by six seconds.

De Gendt said of Vacansoleil team-mate Westra: "Lieuwe is, in this moment, one of the best climbers in this race and two days ago he was better than Bradley Wiggins on the climb.

"I think six seconds is not much. Tomorrow is his first uphill time trial but I think he's going to surprise himself and I'm sure he's going to win the race."

Meanwhile, Wiggins's Team Sky team-mate Mark Cavendish struggled in the fourth stage of the Tirreno-Adriatico coast to coast race in Italy on Saturday.

The Isle of Man rider, came home in 146th place, leaving him 138th in the overall standings. The fourth stage, from Amelia to Chieti, was won by Slovakian Peter Sagan.