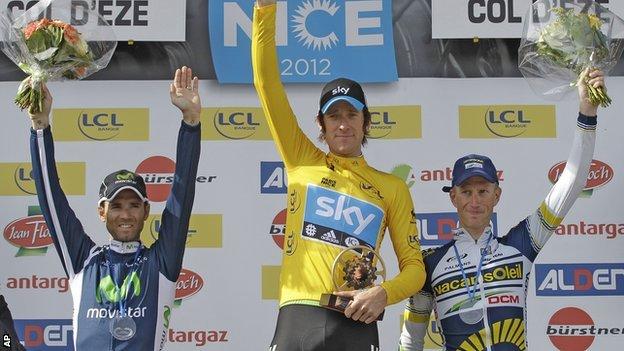 Bradley Wiggins became only the second Briton to win the Paris-Nice race after triumphing in Sunday's final stage.

The Team Sky rider went into the final stage, a 9.6km time trial in Col d'Eze, with a six-second lead over his nearest challenger, Dutchman Lieuwe Westra.

Wiggins crossed the line in 19 minutes and 12 seconds, two seconds faster then Westra, to extend his winning margin.

The only previous British winner of the Paris-Nice was Wiggins's childhood idol Tom Simpson in 1967.

Although Simpson collapsed and died later that year on the slopes of the Mont Ventoux during the Tour de France, Wiggins - who was born in 1980 - has always spoken of how Simpson has inspired him.

Speaking after the event, Wiggins said: "I know my cycling history and this is an enormous achievement.

"It's an honour to be up there with Tom Simpson."

Alejandro Valverde was third overall, one minute and 10 seconds behind Wiggins.

Wiggins had kept the leader's yellow jersey for seven days in the race, which is popularly known as the race to the sun.

The Olympic track goal medallist found himself two seconds behind Westra halfway through the stage, and rode a frenetic finish to win.

"It was a very tough final time trial and I knew that Westra was very strong," said Wiggins.

"But in terms of pressure it was nothing compared to an Olympic track final.

"You can enjoy the moment. I was confident of my ability and I rode it perfect."