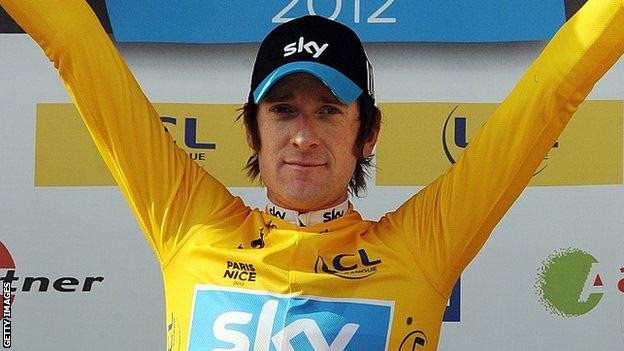 "I think this will be his best ever chance to win it," Boardman told BBC Sport. "Physically and mentally he's in great shape and has the team support.

"There is more time-trialling in the Tour than there has been in the past, so this could be Bradley's year."

Wiggins captured the Paris-Nice title on Sunday, the first British winner of the race since Tom Simpson in 1967.

The Team Sky rider went into the final day of the eight-stage race, a 9.6km time trial on the Col d'Eze mountain, with a six-second lead over his nearest challenger, Lieuwe Westra of the Netherlands.

The Dutchman was leading Wiggins by two seconds halfway up the climb, but the Briton produced a nerveless performance to capture the stage and win the title by eight seconds.

"There are three very big races in France, the Tour de France, the Dauphine and the Paris-Nice and to become the first Briton in 45 years to win this is a phenomenal achievement," added Boardman.

"He would have kept his cool and made sure that when he crossed the line he couldn't have done anything else. Experience is what helped him see it through."

Wiggins came fourth in the Tour De France in 2009, equalling Robert Millar's best ever performance by a British rider.

After switching to Team Sky, he came a disappointing 24th in 2010 and crashed out of last year's event after breaking his collarbone in a pile-up.

He rebounded by finishing third in the 2011 Vuelta a Espana before declaring that he would prioritise the Tour de France over winning a medal at the London 2012 Olympics.

Boardman, who was an Olympic champion at the 1992 Games in Barcelona before turning to the road, says he has seen signs of Wiggins raising his game to another level.

"Stage racing is about consistency," he said. "It's not about being the best every day, it is about making sure you don't have an off day.

"He's concentrated so hard, he is physically in fantastic shape and he has matured. He is ready to go up that extra little step.

"He is one of the strongest favourites, he is in a select group of three or four people who can win it and after the Paris-Nice triumph you would get very short odds on him doing it."

Wiggins will continue his preparations for the Tour de France by next competing in the Tour of Catalonia in March.

Boardman said a victory in France in July would give Wiggins the right to be recognised as the greatest British cyclist of all time.

"Britain's best ever cyclist has suddenly become a very hard-fought competition," he said.

"My career was all we had for a few years but then we had Sir Chris Hoy with his triple gold medal-winning performance, then Mark Cavendish who is heading to be the greatest sprinter of all time.

"Now there is Bradley Wiggins, but if he can take the Tour de France that would probably top them all."