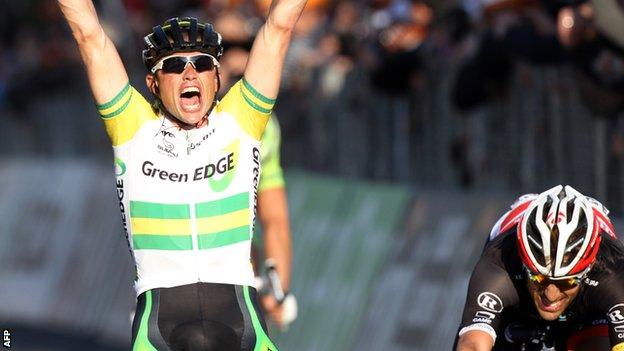 Simon Gerrans made it consecutive Australian victories in the Milan-San Remo classic as Mark Cavendish failed to finish.

Cavendish, 26, and his Team Sky colleagues called time on their chase 48 kilometres from the end.

GreenEdge rider Gerrans was part of a three-man pack that hit the front with six of the 298km remaining.

Cavendish was never in contention for a repeat of his 2009 Milan-San Remo win and first dropped behind the peloton on the mild Le Manie climb 97km from the finish line.

Colombian rider Carlos Julian Quintero briefly lost consciousness after a crash at the bottom of the Le Manie descent with 85km left of the event. The Colombia-Coldeportes rider was tended to by paramedics on the side of the road.