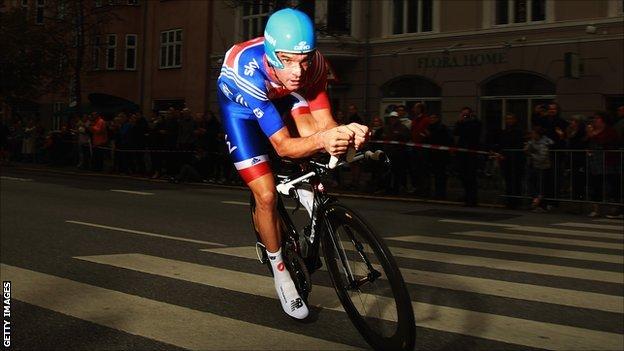 British cyclist David Millar will undergo surgery on Saturday after fracturing his right collarbone in a crash while competing in Belgium.

The 35-year-old, who is waiting to hear if can appear at the London Olympics after being banned for doping, was taking part in the E3 Harelbeke race for his team Garmin-Barracuda.

"The beginning of my season was based around the next three weeks of racing."

A team spokesman said it was not known how long Millar would be sidelined for.

Team doctor Kevin Sprouse said: "This is the same [collarbone] he has broken before. His health is our top priority and we'll continue to evaluate him to determine the best next steps. David is doing well and in good spirits."

Millar added: "It's a big blow to have to bow out in this way, but I'll have surgery and after that, focus on my recovery and take it day by day.

"I still have a lot of goals for the season and at this point, just have to look ahead."

However, the by-law has been challenged by the World Anti-Doping Agency (Wada), who say it is not compliant with the Wada code and is therefore unenforceable.

A special hearing by the Court of Arbitration for Sport (Cas) began earlier this month, with a decision on the matter due in April.