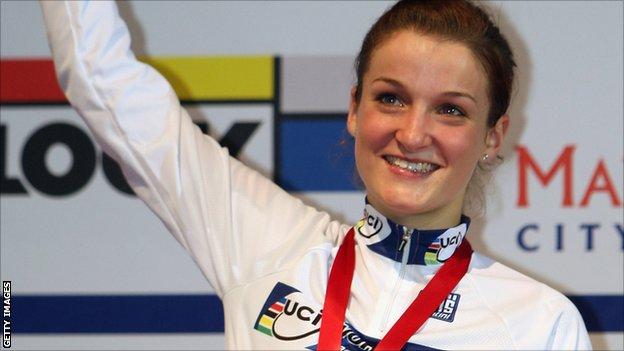 British cyclist Lizzie Armitstead won the Gent-Wevelgem road race with a strong solo ride on the first occasion the event has been staged for women.

Sunday's win formed Armitstead's second victory of the year after she claimed glory in the Omloop van het Hageland - Tielt-Winge in Belgium on 4 March.

The British cyclist, 23, is a big hope for Olympic gold at this summer's road race in London.

However, Armitstead faces a battle with reigning Olympic champion Nicole Cooke for the position of leader in the GB team.

The pair had a public spat at the 2011 Road World Championships in Copenhagen, when leader Armitstead was held up by a crash and Cooke went on to try to win alone.

Meanwhile, Team Sky rider Mark Cavendish had a disappointing race in the men's edition of the Gent-Wevelgem as he eventually finished way back in 58th position.

Cavendish, 26, fell into the chasing pack as the group split with 35km to go.

A late surge from the Isle of Man cyclist in an attempt to bridge the gap proved futile and he was one minute and 30 seconds behind the leaders with 7km to go.

Belgium's Tom Boonen, who rides for the Omega Pharma-Quickstep team, was the eventual victor, claiming his second win in as many years at the Gent-Wevelgem.

Boonen held off the challenges from Peter Sagan of Slovakia and Matti Breschel of Denmark to claim victory.