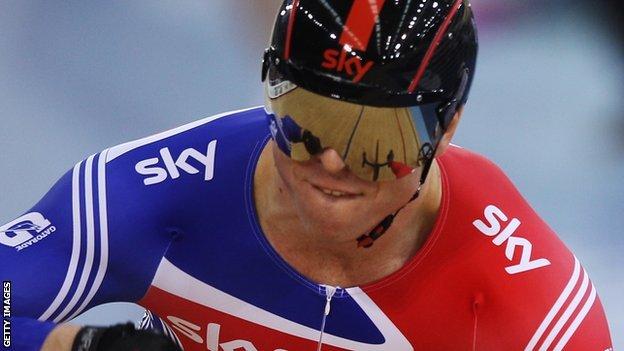 Sir Chris Hoy believes "it is not impossible" for him to repeat his performance at the Beijing Olympics this summer in London.The 36-year-old won three gold medals in 2008 which saw him knighted for his services to cycling.

"If I could win two or three that would be amazing but really my aim is to be Olympic champion in London," he said.

"And if I can repeat (what I did) in Beijing, then that's the dream scenario."

Hoy was speaking in Melbourne ahead of the Track Cycling World Championships as he prepares to compete in the sprint, team sprint and Keirin at the Hisense Arena.

"I would love to repeat my performances at Beijing in London but to be honest, for me I'm just going to go out there and do my best and just hope to win a gold medal," he said.

"I don't think it's impossible and I think that I would only enter an event if I believed I could win it," he added.

The 10-time world champion goes head to head with Jason Kenny, who was second in Beijing and is reigning world champion, for the one available British spot in the sprint in London.

But he is optimistic he can win to secure the final place and add to his tally of four Olympic golds.

"I'm pleased I've done pretty well this year so far and if I can have another good performance here then hopefully it'll be enough," Hoy added.

"The ideal swansong would be to have a successful Games in London and then to go on to the Commonwealth Games in Glasgow because I've never actually raced internationally in my home country in Scotland."