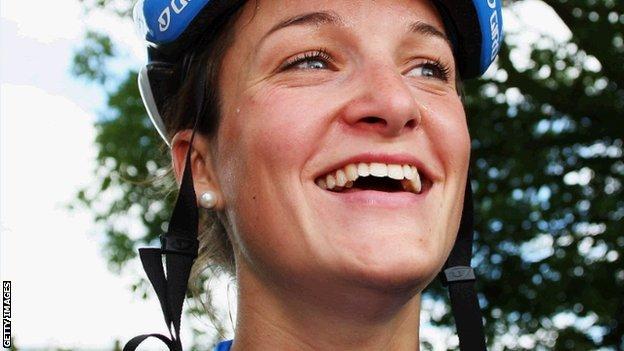 Lizzie Armitstead believes victory at this weekend's Tour of Flanders could help her make sure of a place in the British Olympic road cycling team.

Armitstead, 23, faces Nicole Cooke - her GB team-mate but fierce rival for lead rider in the squad - as they ride for separate teams in Sunday's race.

"I'm hoping to peak this weekend. The Tour of Flanders is the main goal of the spring," Armitstead told the BBC.

Four women will compete for Team GB in the London 2012 road race.

Those four places will not be filled by the selectors until 7 June, later than many other Olympic sports.

But while four will ride, only one can win the gold medal. Both Armitstead and Cooke believe they can put forward strong cases to be chosen as the focus of the team.

Armitstead was set up as the leader for last year's World Championships in Copenhagen, but chaos following a crash saw Cooke - who is the defending Olympic champion - strike out for the finish alone, creating acrimony between the two.

Last week Cooke, who rides for Faren Honda when not in GB colours, said the row with Armitstead had simmered down.

"I have forgiven her and we have moved on," said the 28-year-old.

But Armitstead's impressive form so far this year, including victory in the first-ever women's Gent-Wevelgem road race earlier in March, may add pressure on Cooke to respond in kind.

This summer's road race course is considered likely to encourage a bunch sprint finish. Armitstead, who rides for Dutch team AA Drink/leontien.nl this year alongside British team-mates Sharon Laws, Emma Pooley and Lucy Martin, thinks that will suit her.

"London is potentially a sprinter's course so they'll select riders who are good at sprinting, and not necessarily riders that would suit a more mountainous kind of course," Armitstead told BBC Radio 5 live's London Calling programme.

"Selection is on 7 June and that's pretty late. That's why I'm trying to peak now, in order to have some results for them to select me on something.

"I'll take a break in May, then build up again in the hope I'm selected for July."