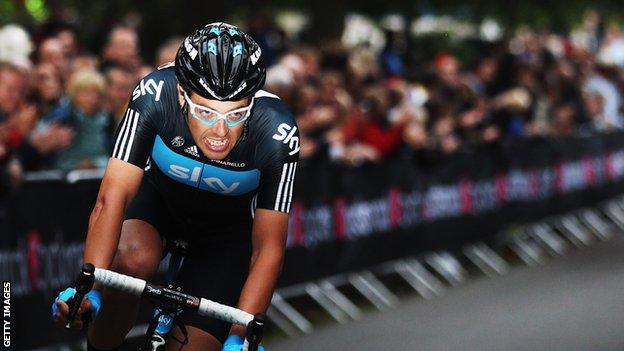 Alex Dowsett has admitted that an ongoing infection following an elbow injury has put a major dent in his Olympic qualification hopes.

The National Time Trial champion broke the joint in three places following a fall in Belgium earlier in the month.

"I am going to be up against it but it's not over until it's over," the 23-year-old from Maldon told BBC Essex.

"It's very frustrating. In another year I'd be enjoying the down time, but in an Olympic year the timing is bad."

My elbow was kind of in three pieces, which wasn't brilliant

Dowsett expects to be sidelined for a further five weeks and will face a race against time to produce performances before the selection period for the Great Britain cycling team closes on the 27 May.

As well as having designs on competing in the time trial, Dowsett hopes his role as the training partner of road race team leader Mark Cavendish will bolster his chances.

"I've had a good start to the season and proved my worth as a team-mate to Mark Cavendish. Hopefully the selection committee will take that into consideration," he said.

"While I know I can be fit for race day in terms of the Olympics, I'll be missing out on a lot of the selection races. I'm taking a positive attitude as always."

Dowsett suffered the initial injury during a collision in stage three of the 3-Daagse van West-Vlaanderen race, but afterwards drove back to England before realising the extent of the problem.

"My elbow was kind of in three pieces, which wasn't brilliant," he explained.

"I had a plate and six screws put in. During the operation I was unlucky and picked up an infection.

"Things are improving. In five weeks' time I'm having the plate out and we can get rid of the infection for good - and I should be back going again."