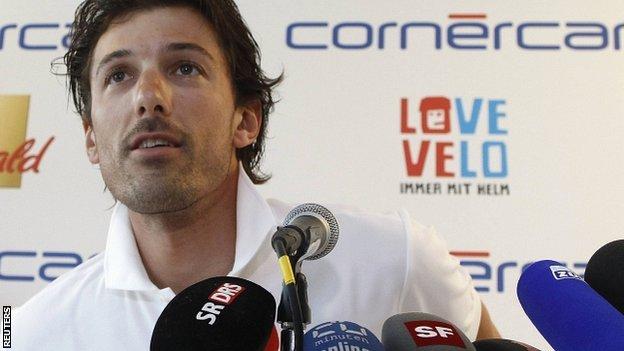 Olympic time-trial champion Fabian Cancellara says he is still on track to defend his title in London despite breaking his collarbone in a crash.

The Swiss rider crashed in the Tour of Flanders classic on Sunday and had surgery in Basle the same day.

"I'm happy that the surgery went so well, but I'm still in pain," said the 31-year-old.

"Because I had planned a break after the classics anyway, my build-up towards London will not change."

I'm going to rest a couple of days, maybe even a week, and then resume training

Cancellara crashed in the middle of the pack during a chaotic stretch when riders were picking up their last food supplies, 60km from the finish in Belgium.

"I'm glad I only broke my collarbone and that I'm OK for the rest," he added. "I'll be back.

"I'm going to rest a couple of days, maybe even a week, and then resume training.

"The plan is that I return to competition in May, possibly the Bayern Rundfahrt [Tour of Bavaria, from 23-27 May], as I did last year."