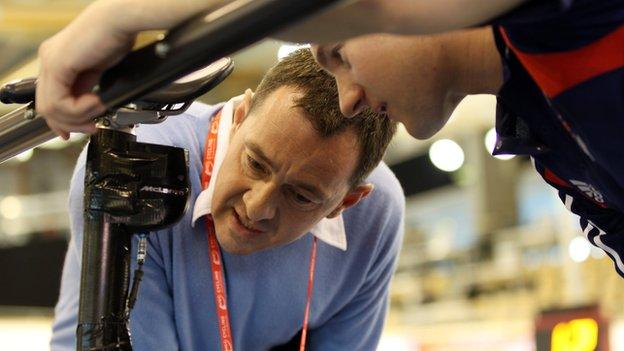 Gold medallist Chris Boardman has announced he will quit British Cycling after London 2012.

The current director of research and development has presided over a period of continued success during a nine-year stint with the governing body.

"This job has been great but it demands your entire life to do it properly," the 43-year-old said.

Full column: 'What I achieved with British Cycling'

Throughout his career, Boardman was quick to embrace new methods and continued that when he moved on to British Cycling's staff.

"I have spent the last nine years working within the coaching, management and technical aspects of the British cycling team," Boardman told the BBC at the Track World Championships in Melbourne.

"Our biggest achievement for Beijing was improving awareness of how important aerodynamics is.

"[The] decision is tinged with sadness because it's a big chunk of my life, but I'm convinced this is the right time. It's been great, but it is somebody else's turn now."

The Hoylake-born rider rose to fame at the Barcelona Games in 1992 when he used a Lotus-designed carbon fibre bike to claim gold in the individual track pursuit and was named an MBE.

He then went on to break the world hour record, and wore the yellow jersey at the Tour de France three times before retiring in 2000.