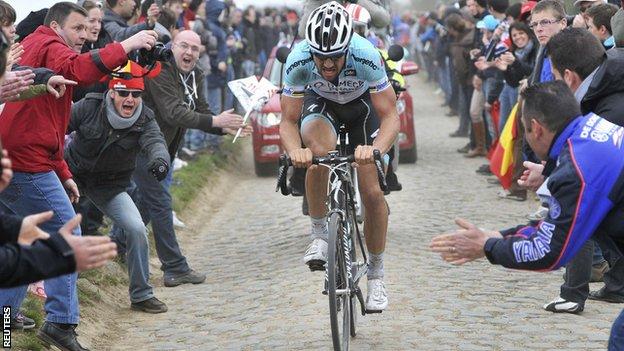 Belgian Tom Boonen became only the second rider to win the Paris-Roubaix classic for the fourth time.

The 31-year-old made his break with 35 miles to go on Sunday, finishing one minute and 39 seconds ahead of Sebastien Turgot of France.

He said: "When I was alone in front, I just went for it. It's my greatest (Paris-Roubaix) win."

Boonen equals the record for the most victories in the race set by compatriot Roger de Vlaeminck in the 1970s.

Boonen, after a few duff years, is having a blinder. He was already having a good start to 2012 when he won another of cycling's "monuments", the Tour of Flanders, last week. This lifts his tally for the year into the realms of spectacular. He is probably now the greatest threat to Mark Cavendish winning the Olympic road race.

The 2005 world champion was alone as he crossed the finish line after 160 miles in arguably the toughest one-day race in cycling, before five chasing riders had even reached the velodrome in the northern French town of Roubaix.

"I think today was one of the best days in my career. Normally I have to use my sprint in races like this and it is always much safer to save some energy for the finish," he said.

"If you put everything into the break and you get caught then you will be in trouble.

"But being a little bit older I tried not to panic and pushed it as hard as I could. It was a little bit crazy. It is not something I often do, but I think today was the perfect day to take a risk.

"I just thought, I already have Flanders, so why not try to get a fourth Paris-Roubaix as well.

"With the wind it was not easy, and I might have been in trouble if a rider like Filippo Pozzato had been able to catch me coming into the Carrefour de l'Arbre, but once I had a minute's lead I realised that I could do it."