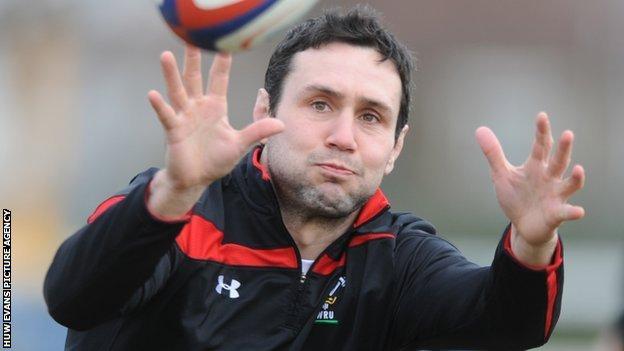 Stephen Jones will leave Scarlets at the end of the season to join London Wasps on a two-year contract.

Jones, Wales's most capped player with 104, is out of contract at Parc Y Scarlets at the end of the season.

"I feel this is the right time to move on at this stage in my rugby career," said the 34-year-old.

"The Scarlets are showing such promise and have plenty to build on for the future with a very talented group of emerging players who are only going to go from strength to strength now."

Wales and Lions fly-half Jones has agreed to sign for Wasps despite an "imminent takeover" of the Premiership outfit having fallen through.

Jones, who won six Lions Test caps on the tour of New Zealand in 2005 and South Africa in 2009, was part of Warren Gatland's 2012 Grand Slam squad but failed to make an appearance.

He is being signed by the English club on a player's contract but his move to High Wycombe to join up with former Blues coach, David Young, could see him move into a coaching role at the end of the two-year stint as a player.

Jones has never played in the Premiership but enjoyed a successful two-year-stint playing for Clermont Auvergne in France. He returned to the Scarlets in 2006.

"We appreciate and support Stephen's reasons for moving at this time in his life and stage in his career and wish him all the very best with his move to Wasps," said Scarlets head coach Nigel Davies.

Jones has seen his deputy with the Scarlets and Wales, Rhys Priestland, emerge as the first-choice number 10 for region and country since the 2011 World Cup in New Zealand.

He is the latest player to announce his intention to leave the region, with lock Dominic Day having signed for Bath and England number eight Ben Morgan heading to Gloucester.

Lock Lou Reed is also being linked with a move to the Cardiff Blues.

But centre Jonathan Davies, who partnered Jamie Roberts in the Wales Grand Slam midfield, has committed himself to a further two years at Parc Y Scarlets.

London Wasps released a statement on Tuesday claiming they were seeking new backers after interest from four parties had stalled.

Swainston is a 22-year-old tight-head prop who played 26 times as Leeds were relegated from the Premiership last season.

And 21-year-old Taylor is a prop capped at Under-18 and Under-20 level for Wales.