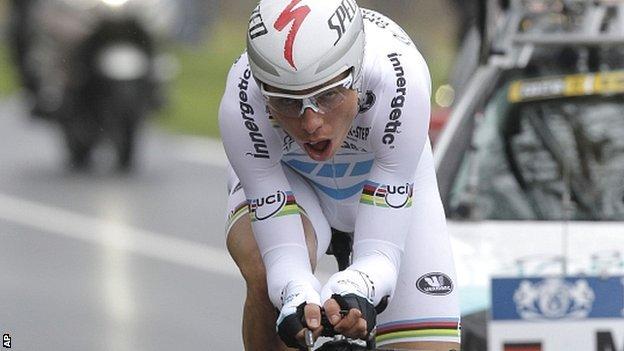 Time trial world champion Tony Martin has fractured a cheekbone after being hit by a car during a training ride.

Martin beat Britain's Bradley Wiggins into second place at the time trial worlds last September and was favourite for Olympic gold in London.

Defending Olympic champion Fabian Cancellara broke his collarbone earlier this month at the Tour of Flanders.

"Martin was diagnosed with a fracture on his cheekbone that probably needs surgery," read an Omega Pharma-Quick Step team statement.

"His clinical condition is stable. In agreement with the team medical staff, Tony Martin will undergo further specific examinations that will define the treatment he will need at that point."

Martin earned 12 victories last year, including Paris-Nice and the Tour of Beijing.

While Wiggins is expected to compete in the time trial in London, his priority may well be the Tour de France in July, in which he has a realistic chance of winning the overall prize.