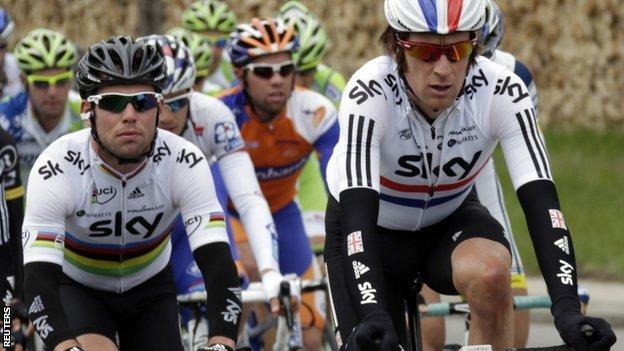 The route for September's 2012 Tour of Britain route has been described as the "toughest yet" by race organisers.

Ipswich will host the start of the race for the first time and the opening four stages should suit the sprinters.

The climbers then take over with the hilly stages around Stoke, in Wales and Dartmoor, preceding a difficult finish on the cobbles of Guildford in Surrey.

"The route is certainly our toughest yet," said race director Mick Bennett. "It will make for spectacular action."

The eight-stage race, which starts on 9 September, will feature a selection of riders from the Britain-based Team Sky, although it is not known whether their lead cyclists Mark Cavendish or Bradley Wiggins will take part.

Both are scheduled to ride in the 2012 Tour de France in July before heading to London for the 2012 Olympic road races.

Wiggins, who broke his collarbone during the 2011 Tour de France, finished third at the Vuelta, behind Spain's Juan Jose Cobo and Team Sky team-mate Chris Froome.

This year's Vuelta finishes on 9 September, the day the Tour of Britain begins.

The opening stage, which is also the longest of the Tour, finishes at the Norfolk Showgrounds on the outskirts of Norwich, while the second stage, which crosses the Pennines, is also expected to result in a sprint finish.

Scotland hosts the third stage, where riders will race from Jedburgh in the Borders to Dumfries where they will tackle three circuits of a finish loop.

Torrential rain and storms prevented a proposed finish on Blackpool promenade last year but the race returns this year for an expected sprint in the shadow of Blackpool Tower on stage four.

The hill climbers will come into their own from stage five, which starts and finishes in Stoke and takes in more than 2,000m of climbing around Staffordshire and Cannock Chase.

After that, there is more than 3,000m of climbing through the Brecon Beacons in Wales, ending with two ascents of the Caerphilly mountain climb.

The following day, the riders navigate the Dartmoor hills before heading to Surrey for the final stage and an uphill finish on the cobbled Guildford High Street.

"We can't finish in London this year because of the strain the Olympics and Paralympics are putting on the city," explained Bennett.

"But the alternative is a brute of a day around the Surrey Hills, which has the potential to be pretty spectacular, followed by an atmospheric finish up Guildford High Street."

Five teams have been confirmed for the race - Team Sky, Garmin-Barracuda, GreenEdge, Vacansoleil-DCM and Liquigas-Cannondale.

No British rider has won the Tour since it was restarted in 2004.