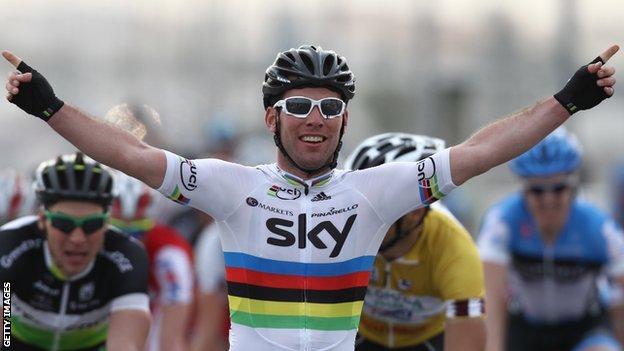 Team Sky's Mark Cavendish has targeted the pink jersey and victory in the team time trial at the Giro d'Italia.

The Manx cyclist heads a nine-man squad for the race, which begins in Denmark on Saturday before moving to Italy.

It will be the first time Cavendish has ridden for Team Sky in a Grand Tour event since joining them.

"We want to win the team time trial and hopefully that will get us the pink jersey - if we could achieve that it would be a massive honour," he said.

For Cavendish, Saturday will mark a return to the scene of his World Road Race Championship and he will be wearing the rainbow jersey he won in Copenhagen last September.

Last five winners of the Giro

"It's always an honour to wear this jersey, most of the great champions in cycling have won it," he said.

"It doesn't matter whether you put it on to go training or whether you are wearing it in a Grand Tour, it's always special."

Ben Swift, a likely contender for a place in the road race at London 2012, was initially on the team but was forced to pull out just 48 hours before the race start after dislocating his right shoulder when he crashed during training for the team time-trial.

"We've got a great team and we'll look to win regardless," said Cavendish. "It's obviously a shame that Swifty's not here but that's bike racing.

The Giro's openings outside Italy

"We've got Jeremy Hunt coming in; Jez is an experienced sprinter/lead-out guy. He probably hasn't got the speed that Swifty would have had coming off the track but his experience will be important."

The race starts with an 8.7 kilometres time trial around Herning, followed by two road stages.

Italian Ivan Basso is one of the favourites to win the overall event, having won the Giro in 2006 and 2010, while potential challengers include compatriots Michele Scarponi and Damiano Cunego.