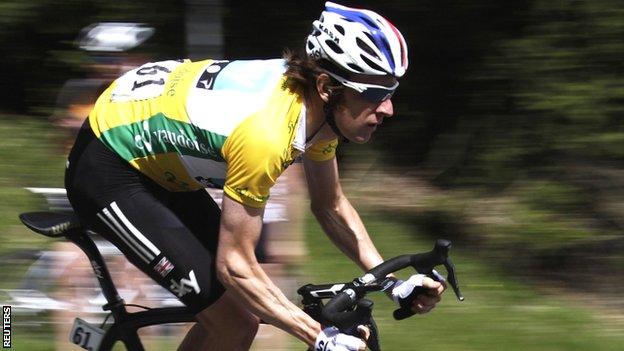 The Briton, who had held a seven-second lead, finished in the peloton after a solid ride by his Team Sky team-mates from La Neuveville to Charmego.

"It was pretty straightforward for me; the boys took the load once again and made my job pretty easy," said Wiggins.

Wiggins also paid tribute to Britain's road race world champion, and Team Sky colleague, Mark Cavendish, who helped keep the pace high on the front of the peloton to chase down a five-man breakaway group.

"Cav just wanted to help and be part of it and that shows the mark of him as a champion - sitting there behind, watching the world champion is quite something, he was brilliant and gave his all," said Wiggins.

"He was making a few people hurt that's for sure."

The breakaway was finally reeled in 6km from the end of the stage and Wiggins's team-mates Richie Porte and Michael Rogers helped him keep pace with the leaders on the final ascent of the day.

Sanchez then edged Gianni Meersman and Paolo Tiralongo in a sprint finish, to collect a 10-second time bonus as stage winner and lift himself up from sixth to second in the overall standings.

Saturday's penultimate stage promises to be a tough ride with three category one climbs over peaks above 1400m.