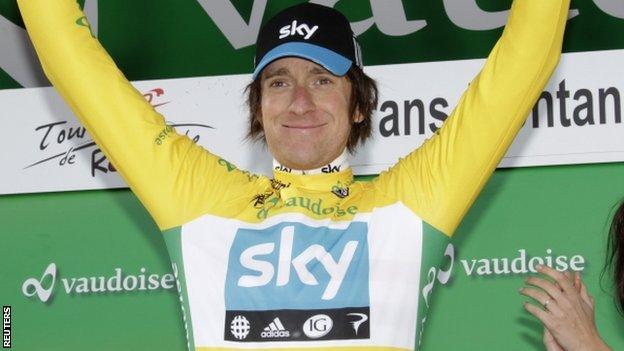 The Team Sky rider, who started the day nine seconds behind Spanish leader Luis Leon Sanchez, had to change his bike's chain after a mechanical problem.

But he powered round in 28 minutes 56 seconds to take the stage by one second and the overall race by 12 seconds.

It is his second multi-stage success in 2012 after he won Paris-Nice in March.

Wiggins is the first Briton to win the race through Switzerland in its 65-year history.

Wiggins, who experienced the problem with his chain at the beginning of the climb at Crans-Montana, said: "It was a true test of a rider, it had a bit of everything in it plus a mechanical problem.

"I'm pleased with the way I handled that moment because a few years ago I might have thrown my toys out of the pram and chucked my bike down the ravine!

"It was a good test for the bigger races coming up and I'm delighted.

"I think this year is a result of the hard work I've put in this winter. But I had a super-strong team this week and they've put me in this position going into this final time trial just nine seconds down.

"The whole race saw how strong they were this week and without them I wouldn't have been able to finish the job today. So I'm delighted to win the time trial and seal the GC [general classification] to pay them back.

"You know you're in a great team when you've got the world champion (Mark Cavendish) riding for you on the front."

"Obviously Bradley is now demonstrating that he can perform at the highest level in these races, but I think more importantly, from my perspective, is I'm interested in how the overall team performs," said Team Sky team principal Dave Brailsford. "Not just the riders but the backroom staff. I'm very pleased with the week in Switzerland.

"People don't see it but it's becoming a well-oiled machine both on the road and off the road. That's very pleasing and people are really starting to establish themselves in their roles.

"The other key thing was that there was a lot of discussion pre-race about Bradley and Mark riding together. Obviously that has been a positive and I think when you see Mark riding on the front up a second category climb it tells you more than any words can."