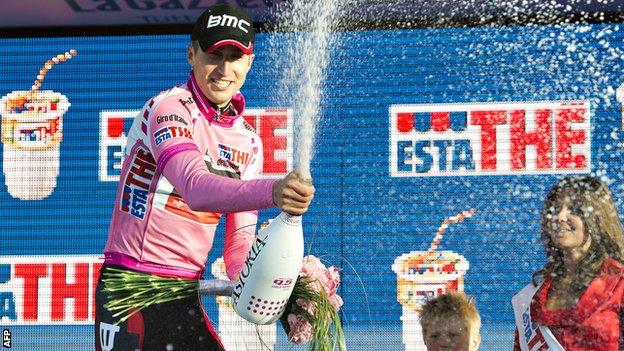 Team Sky's Geraint Thomas was pipped to the leader's pink jersey following the prologue at the Giro d'Italia.

The Welshman claimed second place in the 5.4-mile (8.7km) individual time trial in the Danish town of Herning in 10 minutes and 35 seconds, nine seconds behind America's Taylor Phinney.

The race continues in Denmark on Sunday and Monday with two more flat stages, expected to benefit sprinters, before transferring to Italy on Wednesday.

Thomas declared himself satisfied with his opening day's work.

He said: "I think I measured it pretty well. I tried to carry my speed through the corners, one or two I could have gone a bit faster but losing by nine seconds, I can't blame it on a couple of corners.

"Coming from the track, there's a temptation to try and sprint fast out of those corners but that would obviously take a lot out of me so it was all about judging it correctly, which I think I did.

"I definitely tried to keep a bit back for the last 3km and that headwind and then I emptied the tank all the way to the line. It didn't feel amazing but I was obviously going okay and am happy to have been up there.

"There are now another 20 stages to go and at the end of the day it's about the bigger picture - I'll be there in the sprints for Cav (Mark Cavendish) and then hopefully finish this race well which will set me up nicely for the Olympics."

Phinney, riding for the BMC Racing outfit, becomes the first American to wear the pink jersey since Christian Vande Velde when Garmin won the opening team time trial in Palermo in 2008.

The 21-year-old, who signed as a professional last year for the team of reigning Tour de France champion Cadel Evans, was considered among the favourites for the wind-hit race against the clock.

He did not disappoint, and surged to his first Grand Tour stage win.

As well as winning the under-23 world title for the time-trial in 2010, Phinney has twice won gold in the world championships individual pursuit - an event which is no longer on the Olympic programme - in 2010 and 2011.

On receiving the pink jersey, he said: "It has been a few months I've been thinking of this jersey, this moment.

"From October of last year, we fixed the programme to come here. For me it's a dream to have this jersey."

The main priority for the main contenders to win the overall race was to avoid any mishaps.

But defending champion Michele Scarponi of Italy finished one minute and six seconds behind Phinney.

Spanish climbing specialist Joaquim Rodriguez, meanwhile, was only four seconds off the pace of Basso, while Luxembourg's Frank Schleck - a late addition by his RadioShack team - was 20 seconds adrift of Basso.

The race resumes on Sunday with the wind expected to play a role when the peloton tackle 206km around Herning, much of which will be along the coast.